Evening on the East Side 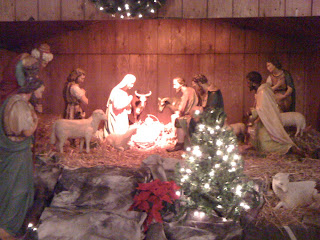 Tonight I met my friend Chris Byrd of Broadway-Fillmore Alive and our friend Charlie from St. Adalbert's for Adoration at St. Ann's. When we were leaving I took the picture above of the church's Nativity set.
St. Ann's has holly and ivy on the confessionals, to give you that Christmas feeling of good cheer when you go in to confess your sins. 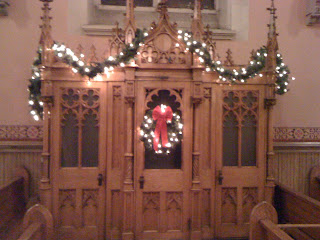 After Adoration we went to the R&L Lounge for a fish fry, on Mills Street by the Broadway Market. As I may have mentioned before it is called R&L for its owners, Ronnie and Lottie. Howard met us at the R&L Lounge and so did Marty and Eddy from Forgotten Buffalo. It was Howard's first visit to the R&L Lounge!

Lottie sat down with us and made the most amazing speech. She began telling us how she met her husband. Well, first she talked about how she dumped her old boyfriend. This was in 1957. Her old boyfriend and she had been going out for a while but Lottie's mother began wondering why they were not "serious."

Lottie leaned close to the table. "You know that expression 'S--- or get off the pot?" she said.

That is an ugly expression and I do not wish to reprint it here! But we all listened, agog. Lottie said how she broke up with her boyfriend and then, something like the next night, she saw him coming out of a tavern on Clinton Street with a new girl.

Already! She could not believe it!

Then Lottie's thoughts turned to nice Ronnie Pikuzinski, who had been coming into the tavern where she worked. I think it was her family's tavern. He had been asking her out, but she always declined because she had a boyfriend. But now that she and Mr. Wrong had broken up, she went to the Polish post on Peckham Street looking for Ronnie. I think she said it was a post. Whatever it was, she found him. "I told the barmaid, 'Bring that man over here!'" That is what she said.

Three days later, she said, Ronnie said to her, "You got to let me know whether we are going to get serious."

Ronnie came out from behind the bar to argue and say it was at least four days.

However many days it was, soon after that they were married at Corpus Christi.

While you are digesting this story you may watch Lottie making pierogi with our friend Eddy.

Speaking of digesting I did not eat pierogi  today, but boy, did I eat fried fish. I ate so industriously that I mentioned Leonard Pennario only once. I am not used to eating fried food! Well, that is why God invented Zumba. Tomorrow I will dance all this off.

Here is a clip of Ronnie and Lottie dancing at the R&L Lounge.

So romantic!
In their honor here is Pennario playing a polonaise.
Posted by Mary Kunz Goldman on January 07, 2011

I know a clean version of "that ugly phrase": Drink or drop the dipper.

Prof. G, that is a nicer phrase but I do not think Lottie knows it!

Just trying to help. I'm worse than Lottie, but edit my earthiness especially for you.

You would get a kick out of Lottie.