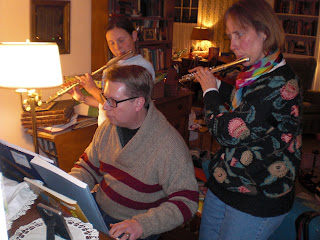 A highlight of Christmas Eve at my mom's was when Howard sat down at the piano and all of a sudden as if by magic instruments began appearing from elsewhere in the room.

My sister Katie, right, and our niece Millie, left, whipped out flutes. Who knew they had brought them? Who knew they could play them? 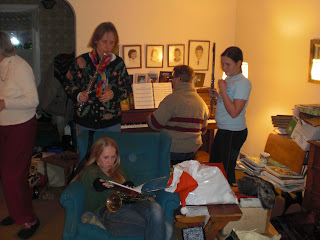 Our niece Rosie, surprise, had brought along her trumpet. There she is in the armchair trying to figure out what to play. She played! She sounded great.

Even little George Andrew got into the act, using a coffee can as a tom-tom. 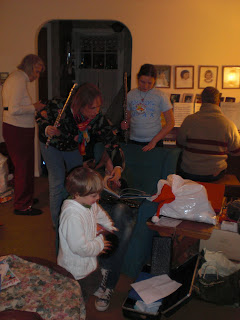 Together all these musicians amounted to quite a band. Their most successful number was "God Rest Ye Merry, Gentlemen." It rocked the house! The greatest thing was, we could not believe it, when these instruments appeared. No one had mentioned bringing them along. No one had to run out to the car to get them. They were just there, and nobody knew.

So that was one highlight. Another highlight was when Howard and I got there, about 6 p.m. We brought a spinach salad with apples and walnuts and blue cheese. And bread that was right out of the oven. My brother George was supposed to be bringing a turkey. And he had! But the turkey was stripped to the bones.

"How long have you been eating?" we asked.

They had all been there only an hour!

There was also only a couple of spoonfuls' worth of mashed potatoes left. I am the only one who cooks in quantity, you know? Everyone always mocks me out for making so much food but I will tell you this, when people come to my house, they eat.

My mother had been making the traditional split pea soup that we eat for some reason on Christmas Eve and she had even borrowed a Crock Pot to do it so it would not burn. It is way too easy to burn split pea soup. But the split pea soup was cold because the Crock Pot had been turned off. Hello! You do not have to turn off a Crock Pot. You can set it on Warm and it will do fine for days.

Well, no matter, because there was a lot of wine and that was what mattered. Brother-in-law David had brought his elderberry wine. Yum! And there was elderberry pie.

My brother Tony asked me a few questions about Leonard Pennario which I loved.

The presents for the kids were hits so that was good too. Except how was I to know this, the presents that put Rosie over the moon were all hair products. I did not have to think about it. I could have just stopped by a drug store! She was showing me this one bottle of product she loved. The label was Long-Term Relationship. It is pictured here! 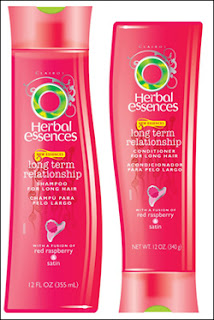 And we thought we were silly back in the day with Gee, Your Hair Smells Terrific shampoo! Long-Term Relationship shampoo is even sillier.

OK, tomorrow we do this all over again.