Grin and beer it 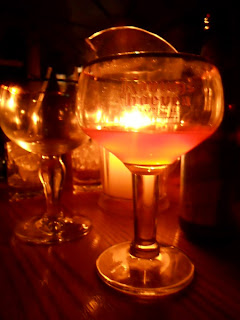 Today's paper has a fascinating story by my colleague Andrew Galarneau about Buffalo being a beer tourism town. That is a phrase I love, beer tourism!

Where do I stop? I could go on like this all day. By the way, is that not a beautiful beer picture up above? I cribbed the picture off the Web log of this great beer brewing company, KegWorks, that I just discovered. The picture was taken at the Buffalo beer bar Blue Monk which I guess is busy, busy, busy, packed all the time. That is why I have not gone there yet. I am too busy with Leonard Pennario to spend time waiting in beer lines. You have to draw the line somewhere.

Andrew's story is about how all the Canadians have to come down to Buffalo to find decent beer. The story paints a chilling picture of socialism in action when it talks about the beer situation in Ontario. The rules and regulations are such so that small beer brewers cannot break into the market. Their beer up there can be sold in only two outlets: the government, or the Beer Store, which is owned by three major beer companies. Lots of luck getting in there.

What is their government doing in the beer business, anyway? This is what happens when you let government run your business. Your choices disappear.

Learn from this, America!

I am grateful to this story because it knocked Pennario out of my head. Normally I get up early and work away at the book and it is hard to switch beers when it is time to turn to other work. Did I write "switch beers"? I meant switch gears.

This story did the trick!

Unfortunately it also left me craving a beer, at this unholy hour.
Posted by Mary Kunz Goldman on December 01, 2010

Email ThisBlogThis!Share to TwitterShare to FacebookShare to Pinterest
Labels: Beer

Nice to know this blog is out there. I am always looking for compatible companions to mine.
My contact with Buffalo is sparse. When my brother was a grad assistant in the Dept of Latin American language and literature.. not sure of its exact classification in academia, I got a taste of the bitter winters during my Christmas break from Oberliin Conservatory. Brrr.. freezing..worse than bitter Lake Erie winds in Ohio.
I did investigate the practice rooms and kept up my skills in prep for my senior recital. It was a must to find just about any piano to practice on. Not sure about the beers over that way, but I liked the earthiness of the place.. no airs.. no pretense. Good rock solid working class population surrounding the University.