Evening with the stars 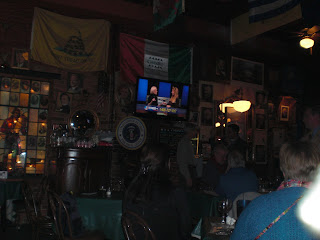 Tonight we went to Founding Fathers Pub and celebrated the release of a documentary about Buffalo broadcasting! Above is a picture of the action.

In my masterful photo you can see our friend Steve Cichon, from WBEN-AM, at the microphone interviewing radio's legendary Stan Roberts. I and my household used to listen to Stan Roberts in the mornings when I worked at Citibank, or maybe after that, who knows. All I remember is my housemate and now Facebook friend Severin and I loved him. We loved his voice and we loved how for a while they had him on with this other guy, Stan Boschansik. I have no idea if I am spelling that right.

They were always saying, "Well, Stan..." to each other. We laughed and laughed.

The things that amused us back then!

It was exciting that Stan Roberts showed up at Founding Fathers because now he lives in Florida. Facebook friend and radio and TV biggie Al Wallack was also there. So was Dale Anderson from the paper, writing a story. Stan Roberts sat with him.

And when the documentary was not showing the TV screen switched to WNED. That is my Facebook friend Doris Jones, another television legend, on the screen, on the left!

Anyway, good times, talking about radio, which ranks right behind Leonard Pennario among things I like to talk about. It is whispered that our friend Shane, Brother Shane, is going to be inducted next year into the Buffalo Broadcasting Hall of Fame. Dignum et justum est, as we say at Mass. That means, "It is right and just."

Here is a picture Howard took of Shane and me. 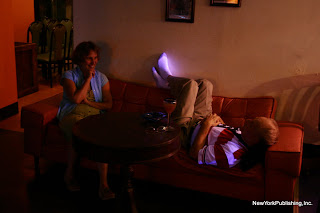 Ha, ha! I love how Shane's socks are glowing white. That picture was taken at Big Blue.

I like myself when I am in conversation with broadcasting legends!

Enough name dropping for one day!
Posted by Mary Kunz Goldman on December 06, 2010