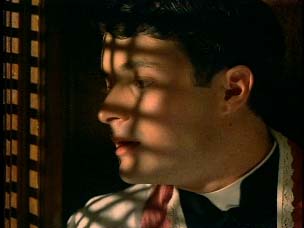 Yesterday in Zumba class there was someone who was new and I was encouraging her. I told her how the first class I took, all I did was laugh. That is the truth!

It is funny in Zumba class how the teacher usually asks first thing if anyone is new. Usually a couple of hands go up. And we make a fuss over these people.

Whereas with me, no one made a fuss over me because I came into my first class in the middle of class. I found a space on the floor and tried to follow along the best I could. The part where they ask if anyone is new, I missed that part.

I have been thinking, it is just like Confession. I have been writing the last couple of days about Confession. Only I could draw a parallel between Confession and Zumba. Hahahahaha! But there is one!

End result, as we say here in Buffalo: Every month all my classmates went to Confession and I just sat there. Because I had not made my First Confession. I would hear them all rehearsing for it and getting ready but I did not have to go.

This went on for several months, a year, who knows.

Finally one day our class was herded over into church as usual to go to Confession. And all the other kids went. And there I am still sitting there in the pew, as usual. And this nun, our teacher, walked up to me.

"But I haven't made my First Confession," I began explaining.

I was shocked. I stood up. There was no getting out of it. I got in line. My turn came. I walked into the booth and the window slid open. I knelt down. I said, "Bless me, Father, for I have sinned." I had heard the class rehearsing that. After that is when you say how long it has been since your last Confession. And of course I had never been before. So I whispered, "This is my first Confession."

What I confessed, I have no idea. What I do remember is that the priest made no big deal out of it at all. He just walked me through it. That was my first Confession. No fanfare, no nothing.

Now I look back and think, God love these people. I do not know if now they would be able to get away with doing what they did then, which was just what needed to be done. That nun knew exactly what was going on. I would have sat there forever, never going to confession. I would still be sitting there today!

So she made the call. "You go." Then the priest takes it from there. No biggie, this little girl walking in and saying it is her first Confession. Just do it, you know?

All the same, it cracks me up. I remember that and think, this has been my life.

I never went to journalism school and here it is my job. I had never written a book before and there I was telling Leonard Pennario I would do it. I had never been to Zumba class before and I just walked in and started doing it.

No muss, no fuss. And I think it is a good lesson.

Learn by doing!
Posted by Mary Kunz Goldman on November 10, 2010

Yes.. only you would make that comparison, and I think it's great!!!!