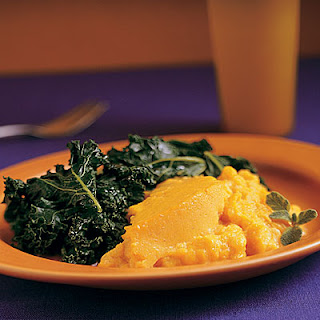 I went to the Clinton-Bailey Market with my friend Lizzie.

What a mistake that was!

Lizzie did not discourage me when I expressed a desire for one of those huge snowy white cauliflowers even though I already had one at home. Alertly she spotted a deal for two five-pounds bags of carrots, both for $3 or something. End result as we say here in Buffalo, enough carrots and cauliflower to sink a ship.

We both bought half bushels of Golden Delicious apples for $4 a half bushel.

We split a half bushel of squash from Ebenezer Farms and had them split it so each half was part buttercup squash and part acorn squash.

And to top it off:

There was a bushel -- a whole bushel, NOT a half -- of use 'em or lose 'em butternut squash. And Lizzie did not stop me from buying it!

I had to go home and roast all this squash immediately. My whole oven was filled up with squash. Liz only took maybe three or four of them. Howard and I ate squash yesterday and today. Yesterday it was squash cubed and braised with greens. Today it was a squash and cheese souffle. It did not rise the way it was supposed to but it was yummy anyway. If anyone else tries the recipe, let me know if you get it to rise.

This is Squashville! This is the clearinghouse for all things squash.

After buying that squash I went to two estate sales with my mom in Clarence and one of them yielded Pennario's Tchaikovsky record which I did not have. So, score!!

Something I could listen to while I chopped up that squash.

Remind me, someone, next time I go to the market, not to bring Lizzie.
Posted by Mary Kunz Goldman on November 14, 2010