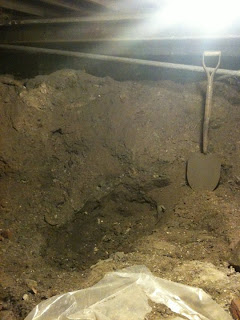 Howard took me through the cellar of Big Blue to show me the coal ash he has been shoveling. There is a whole room filled up with coal ash and he has been shoveling it out bit by bit. While I am writing about Leonard Pennario that is what Howard is doing, moving his ash. Sorry, I could not help that!

Above is a picture of the project. That is what it looked like when I saw it tonight.

Parts of the cellar date to the 1850s and it being Beggars Night, right before Hallowe'en, one problem I had, I could not stop thinking about Tom Bauerle's ghost show the other day and some of the stories that were told.

One of them was about a cellar! It was about the cellar in the Millonzi House, on Symphony Circle.

This woman talked about how a friend of hers worked in telemarketing for the Buffalo Philharmonic back when they had their offices in the Millonzi House ... 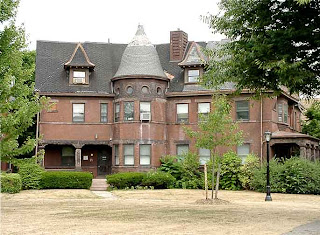 ... which is right across the street from Kleinhans Music Hall. I picked up on that because I used to have a roommate back then who worked there, too.

The caller told Bauerle that her friend had the job of locking up the Millonzi House. So one night they were ranging around. They went down in the cellar because the house had the reputation of being haunted and they wanted to see what they could see.

And what they saw was a black mist!

It formed in the middle of the room, this concentrated black mist, and began swirling around. Imagine that. Imagine you are standing there in this cellar and this black mist appears. I got tears in my eyes just hearing about it. My eyes fill with tears when something gives me the shivers.

"His feet left the ground!" she said.

Bauerle has the funniest appreciation for stories like this. "Wow!" he said. "That is so cool!!!"

His question after that was: "Can the Bills draft the black mist?" Hahahahahaha!

But if you were there with that mist it would have been no laughing matter.

Here is my problem with ghost stories like this. Technically I believe in ghosts, although my experience with them has been, shall we say, limited. I believe in ghosts because a lot of people through history have seen them and besides, I believe in a life after this one, so they make sense.

You cannot just go to sleep that night after seeing something like that, and then get up in the morning and go about your day. I would be permanently shaken! As Howard said you would go around the rest of your life clutching a rosary.

Another thing that puzzles me is, all these people who have dealt with these houses that are not quite right, it never occurs to them to get a priest in there. That is what I would do ASAP. Why would I want to take on this ghost myself? I would let the priest be the middleman, I will tell you that right now.

Well, that is me.

Considering that no one else seems to think like that, I wonder if that black mist still lives in the Millonzi House.

Perhaps it is still there!
Posted by Mary Kunz Goldman on October 30, 2010

Don't know anything about a black mist and never ever felt any malevolence there. Great story about the fued between the two Maythem Bros, had lots of experiences (since I created the TeleResource Dept) of sightings (human) and feelings (cold breeze, etc), even came across a woman running up the stairs to take care of the children - but never any bad feelings - even had a medium come in once - very interesting.

Wow, thanks for the comment and the story! You worked at the Millonzi House? Can you tell us more about the woman running up the stairs? Also, what is it like after you have seen a ghost? I can't quite imagine it.