Let's do the Time Warp 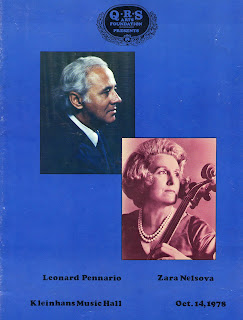 Imagine it is Oct. 14, 1978. That is what I have just been doing! That was the day that Leonard Pennario and the cellist Zara Nelsova played Kleinhans Music Hall as part of the old QRS Concert Series.

I wonder what Zara Nelsova's real name was. Let me go check. Ha, ha! I just went on Wikipedia and it turns out it was Sarah Nelson. She was Canadian, born in Winnipeg. It is funny but a little sad how classical musicians used to think they had to change their names, because Eastern European was so in.

Still it is great to imagine how they came up with that name. She and her friends must have been sitting around drinking beer one night, is all I can think. Sarah became Zara and Nelson became Nelsova and they must have laughed themselves silly.

Back to the QRS recital. Above is a picture of the cover of the program. Looking good, Leonard! As usual.

Here is a page of our old Turgeon Brothers restaurants. Someone was just reminiscing about them on Facebook the other day and trying to list them. Well, now here they are! 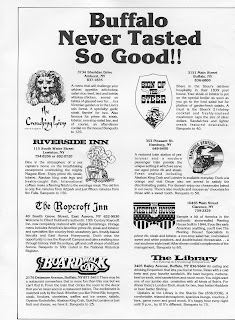 We still have Coles! Now I am extra proud I did a story on them recently in The Buffalo News. They sponsored a concert by Leonard Pennario! And Positively Main Street, I believe that store is still there, too. 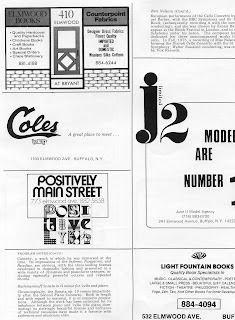 Another thing that has not changed is Tops. They are the same, logo and everything! 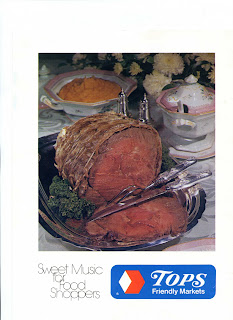 "Sweet Music for Food Shoppers." Who knew that the people at Tops were such Leonard Pennario fans?

I always knew I liked that store!
Posted by Mary Kunz Goldman on June 29, 2010

So that is how they come up with East European names... just get drunk and try to say the 'usual' version. Ah! I shall never know the E.E. version of mine then, lol.

Larry, I think you are onto something! I bet that is exactly what they do! And it helps if they drink vodka.