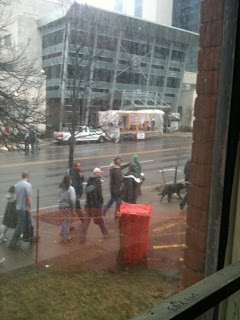 How goofy is this, I was late for church today but not because we lost the hour!

I do not need help from Daylight Savings Time to get behind with my life. I can do that just fine on my own.

I remembered the hour. But I have this problem with my vintage clock radio. When I set it to wake me up I have to make sure that the volume is up so I will hear it. I did not do that last night. Then I ended up going to bed very late, and so I did not wake up naturally.

And, I mean, it is nice that my body clock awakens me in time for Mass but, you know, as long as it is doing that it could give me an extra 10 minutes. As it was I had to leap out of bed and get dressed and out the door and into the car and downtown in 17 minutes. And I made it to church just one minute into the Asperges which starts the Mass. I was so discombobulated I forget to genuflect. I am sure everyone was laughing at me.

She forgot Daylight Savings Time! they must have been saying.

Plus they were probably whispering it in Latin. In Latin it sounds even worse!

Now I am Web logging live from Big Blue where we are here to watch the St. Patrick's Day parade. A gentleman is selling cotton candy right on our doorstep! As Howard says it does not get better than that.

We have a loungey Michel Legrand record playing in the deejay booth.  Michel Legrand's orchestra is playing "Hymn to Love." Earlier we were listening to Bill Evans playing "Danny Boy" but that was too tasteful.

Also in honor of St. Patrick's Day we listen to Leonard Pennario playing his Art Tatum-like rendition of "The Kerry Dancers."


I will report on the parade as it unfolds. For now, up above is a picture Howard just took out Big Blue's front window. You have to love the dog walking past.

Things are only going to get better!
Posted by Howard Goldman on March 14, 2010

I didn't notice that you neglected to genuflect.. and it never even dawned on me you were "late" due to daylights savings time. The only thing I was sure to take note of was whether or not you were wearing your new veil. hahaha

I too looked for the new veil...maybe next week!

This is the greatest, two gentlemen from my church waiting to see my new veil! Bing and Bill, blessings on you both! I will make sure to wear it next Sunday.

Back in my church-going days, there was one "cardinal" rule -- whenever the clocks moved an hour, attendance would go down. It didn't matter in which direction; some would get confused and get up too early or late and never figure out how to straighten things out.