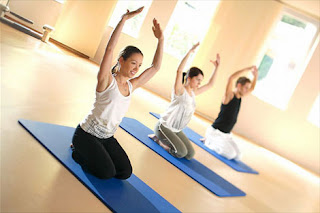 So we beat on, boats against the current, borne back ceaselessly to the Buffalo Athletic Club. It was back to the gym yesterday with my over-served self. That is a word I love, over-served. Usually you use it in the negative. "I was not over-served."

Yesterday, I was! So today, back to the gym with my expanding self.

Every time I go back to the Buffalo Athletic Club, it is like "Groundhog Day." I never actually saw that movie but I understand it is like a time warp. Today I walked into Pilates class after an absence of some time and they were still playing the same Ben Lee song. Not only that but you had no choice but to listen to it because the teacher had lost her voice. Ha, ha! She had the microphone and instead of her voice you would just hear this sort of soft squawk as she whispered to you to do this and do that. I felt bad for her but at the same time you had to laugh. She was laughing too.

The same people were in the class and their mats were in the same place. This guy Joe I know from the class, his mat was in front of mine the way it always was. And Joe was still grunting and groaning in the same way. Joe is much more faithful to the class than I am but somehow it never gets easier for him.

This is funny too. I go back to work, and after Pilates class you feel great, all mellow and stretched out. And the phone rings and I answer it. And it's this announcer for WXRL. That is our homegrown country honky-tonk station. I have been known to tune in now and then.

The announcer did not mean to get me. He meant to get the news desk because he had a tip to pass on. But we realized we had talked to each other before once so we began talking again. He was telling me he used to work for WEBR, another Buffalo station, back in the '50s.

How about that? Just the other day my friend Joey Giambra was telling me that once Leonard Pennario was featured on an Amateur Hour on WEBR. I guess he was a kid. Well, he would have had to have been a kid because starting at 12 he was no longer an amateur. Probably before that he was no longer an amateur. Joey Giambra is putting me in touch with a painter who was on the show with him.

Anyway WEBR was on my brain because of that and I asked this caller, Dan McBride, if he had known Leonard Pennario.

I got the Buffalo answer: "Oh, sure, I knew him real well."

Here is a picture I found online of a Buffalo family at the Town Casino. 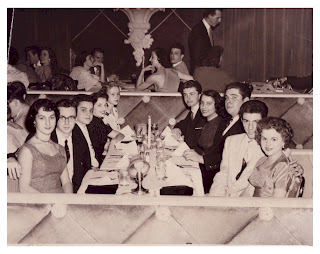 I was worried there may have been a misunderstanding so I began explaining, "This is, ahem, the great concert pianist Leonard Pennario I am talking about."

Ha, ha! Were I writing about Gary Graffman or Leon Fleisher I would not have stuff like this to deal with, I can tell you that. As it is I do not know if I will ever straighten all this out.