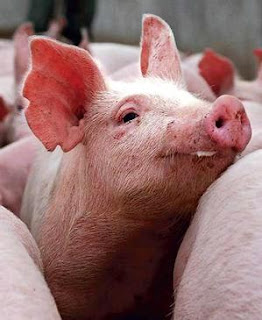 Zut alors, I thought I fasted on Ash Wednesday and it turned out I was a pig!

There is this Catholic Web log I check in on now and then and I just took a break from my Leonard Pennario book to check in on it. Was that ever a mistake! The priest who runs the Web log had asked people to 'fess up on what they ate on Ash Wednesday and at last count 115 people had.

I could not believe those people.

"One can of sardines, a banana and a glass of orange juice, all at about noon…nothing else." That is the first comment. And it is downhill from there.

"A slice of rye bread for supper."

"One bowl of porridge a day for Lent. Plenty of tea and coffee though as I have quite a physical job."

Who are these people? Where do they come from?

What is all this "supper"?

Another thing, what is this "porridge" everyone is eating? What is this, "The Three Bears"?

And all this coffee. I would not sleep for a year.

Here is a classic:

Breakfast – one slice of bread, glass of water
Lunch – water
Dinner – wasn’t till I got home after singing at Mass – 1.5 dinner rolls, water.

Got to get that in there, about singing at Mass, you know?

Breakfast: two slices of toast and a glass of juice.
Lunch: nothing
Dinner: two pancakes, no extras, glass of juice
Supper: one banana
I thought I was doing well until the banana, but a check of the fish eaters website revealed that a banana was, apparently, acceptable. In hindsight, I think not.

What in the world? I have no doubt these people are holy. But I checked the rules for the Ash Wednesday fast and it is not meat, but you are allowed three meals, one of them a full meal, the other two not. There is nothing about porridge in there. These uberfasters make it so tough for the rest of us!

On the bright side, there is one woman who wrote that at midnight she just couldn't stand it any more and headed to the kitchen for two eggs and a bit of red wine. Ha, ha! Maybe I wrote that and I forgot.

I also like the one priest who went out to eat and had a beer.

OK, I am going to wind this up and stop mocking out my fellow Catholics.

I've heard about limousine liberals, now I've read about a limousine Catholic (ain't I a stinker??).

Ha, ha! I am a limousine Catholic! I am. too funny.

I would have eaten that pig in the picture if he was cooked! But, I am just a Baptist.

Larry, come up and we will have a pig roast.