Be it hereby resolved 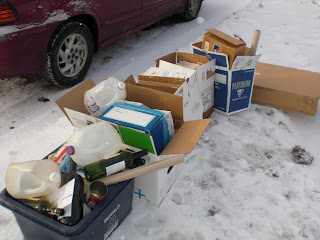 I have fulfilled my first New Year's resolution. That is to get my recycling out on time!

Howard says that the garbage and the recycling all ends up going to the same place but I cling to my belief that the recycling is indeed separate. That is a picture of my recycling this morning! To the left is the leaky cider jug that leaked cider all over the fridge, remember? Directly to the right is a Tisdale wine bottle.

What an accomplishment! My next resolution is to finish the book on Leonard Pennario but I will tell you this, after doing my recycling, it will be a piece of cake. This recycling is no joke. What with the holidays throwing my life off-kilter I had put it off for a number of weeks. Now, no more procrastinating. That is another of my New Year's resolutions!

So this morning, 8 a.m., it did not matter that it was 8 degrees, I was out there. I had to put on boots, coat, hat, everything. The recycling has to be just right because the public servants who collect it pass on no opportunity to cut corners. As it was they left the big cardboard box. So that had to go in the garbage. Well, as Howard says, it all goes to the same place anyway.

Here is a picture of my recycling looking east down the street. 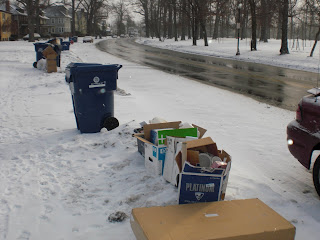 Across the street looked pretty so I took a picture of that too. By doing so I fulfilled another New Year's Resolution which is to take more pictures. 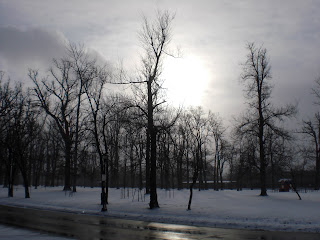 After that excitement Howard and my brother George and I went for a walk in the park. I have resolved for the New Year to take exercise every day and so far in 2010 I have done that.

Four New Year's resolutions lived up to right off the bat is not too bad!

Good for you for getting out there walking! I remember last year, I walked in the park on January 1st - this year I did not do that. Good luck and maybe I'll see you in the park someday! Happy New Year to you and Howard.

Just remember to take off the ski mask when you go to the bank. . .

My only New Year's resolution was to not make any resolutions. And so far, all is fairly well.

You said: "I have fulfilled my first New Year's resolution. That is to get my recycling out on time!"

Let me see if I rightly understand this. Now, I have been reading for a while... Is the idea to collect stuff at yard (and other forms) sales and then put it out for the 'recycle-man'? I mean, that insures it is recycled, right? Anywho, Happy New Year!!!