Me and Bobby McGee's 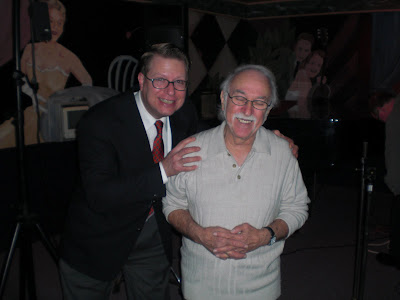 Suddenly my life is all about blues! These evening we went to Bobby McGee's and heard, ahem, Sir Walter Jedermann playing the blues. Well, he played jazz too. He played the song "Sweet and Lovely" which I love. This is the new Bobby McGee's. It has moved from its dark little University Plaza location to spiffy new digs where the Dakota Grill used to be.

That is Howard up above with Wally Jedermann! This being Buffalo where everyone knows everyone Howard had known Wally long before I did. There is this funny Buffalo story that dates from about 9 years ago, when I had not known Howard very long. I was able to get Wally over to my house for some holiday. It may have been Fourth of July, I don't know. And Howard came over and flipped! Because it turned out Wally had been at his house for holidays when he was growing up. Howard had not known I knew Wally and I had not known Howard knew him.

Jedermann means "Everyman" and that is one thing about Wally we get a kick out of.

Also when he plays the vibes he is offhanded about it. Just like a kid grilling hot dogs at Ted's Hot Dogs! That is what Howard said last night.

Here is Wally imparting wisdom to Howard after the show. I love Howard's look of concentration. It is like me listening to Leonard Pennario!

You know what I hate? How every time I mention Pennario my computer underlines the word in red.

Are you sure that is how it is spelled?

"I never heard of him." That is what the computer is telling me.

This is been going on for over two years. You would think the computer would get the hang of it by now who Pennario was or at least realize that I tend to type this name rather a lot. But no. It does not.

It is insulting!
Posted by Mary Kunz Goldman on December 15, 2009

Son of a sea cook--you'd think by now you would have added "Pennario" to your spell-checker's dictionary. No sense letting yourself be borne into the past at this point though, I suppose. Maybe you could call him "Ishmael" instead.

Mary, try right clicking on it the next time and see if you are presented with the option to "Add" or "Add To Dictionary".

Did the good knight play "Darn That Dream"?

Daryle, you are the "Darn That Dream" player, there shall be no others besides you.

Larry and Ward, son of a sea cook, I never knew how to add anything to the spell-checker. I just did it. Problem solved! Thanks be to both of you!