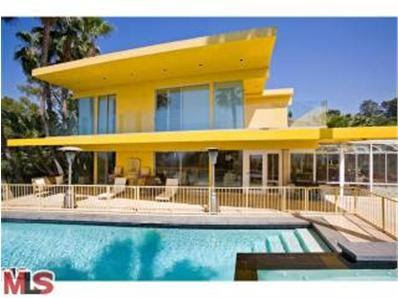 Leonard Pennario's old property on Calle Vista in Beverly Hills is for sale and they are asking $8 million. But now it appears the price has fallen because the place is in foreclosure.

Pennario had a handsome house but they knocked it down and built that ugly place pictured up above. If you watch this slide show you will see other pictures. The interesting thing is the views the place has. Pennario told me it had a wonderful view of Beverly Hills.

That is too bad it was knocked down! Jascha Heifetz used to go visit Pennario when he was there. They should not have knocked down a house where Pennario and Heifetz played. Well, nobody asked me. And there is nothing to be done.

So tonight Howard and I did not go to Calle Vista Drive. We went to Parker Boulevard! There was a Christmas party at Howard's friend Mike Lauria's house.

Here is my brother Tony with a blond. 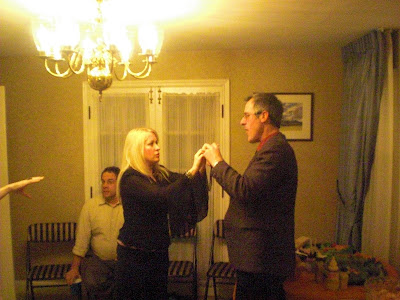 Here I am with my braces and our host, Mike Lauria. He is an airline pilot. 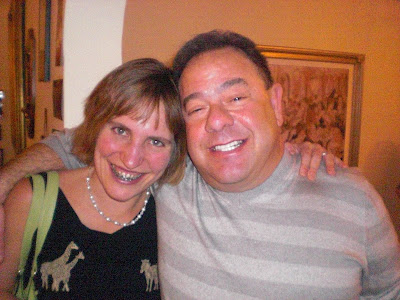 Another view of my braces from Christmas dinner at my sister's house in East Aurora, with my niece Millie and my nephew George Henry. 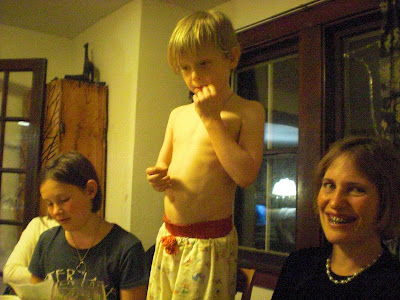 George Henry was inspired to flash his own toothy grin. 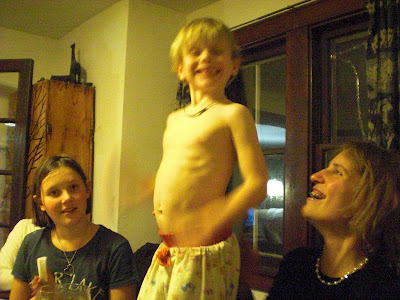 George Henry is wearing his new Christmas pajama pants and I am wearing mine too although you cannot see them in the picture. It was fun riding home in the car in my pajama pants. My mom was in the front seat with Howard so I got to stretch out on the back seat. I have not gotten to do that since I was 12, stretch out on the back seat, let alone wear pajamas when I do that.

We had a hilarious situation at Christmas dinner with George Henry's front tooth. It was loose and he kept twisting it. My nieces apologized to me saying it was the grossest thing. George Henry would brag that he could turn it backwards. And he could!

Finally he went "Ta da!" And it was out! He was waving his tooth and crowing in triumph.

Speaking of teeth I look at pictures of my braces and I cannot believe that a week from now they will be ausgegangen as my father used to say. Ausgegangen is German for out the door.

Wednesday is the big day!

It will not be the same going through life not looking like a 12-year-old. As in this picture Howard took of me in my pajamas on Christmas Eve opening my Christmas presents. 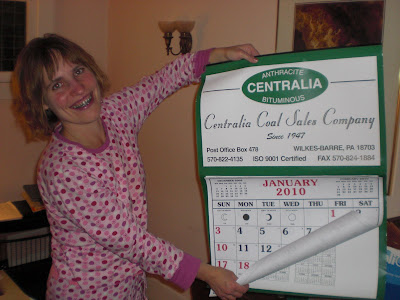 Something about braces makes you not concerned with looking good so I just smile for the camera, la la la la la. I

After Wednesday, who knows?

I might become all self-conscious!
Posted by Mary Kunz Goldman on December 26, 2009

Mary, you look so pretty and cute with the braces, it almost seems like a shame to chunk them come Wednesday. Since I have not known you without them, I am experiencing high anxiety just thinking about it!

The Christmas pictures were all adorable and it was nice of you to share them. I like George Henry a lot, lol!

Ah, Centralia -- the little town that caught on fire so that all of the residents had to move. You might want to stay away from that calendar.

Budd, I will think of you whenever I look at my Centralia calendar!

Larry, you are so nice to me!! I have to say though that think I come off as slightly more adorable on the Web log than I am in real life...