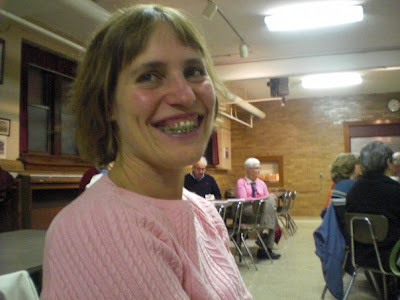 Look at that picture. That is me! Lastnight Howard and I went to our friend Steve Cichon's book signing talk at St. Mark's up the street. Howard took that picture of me while we were waiting for Steve to step up to the podium.

Here is a picture of Steve giving his talk. 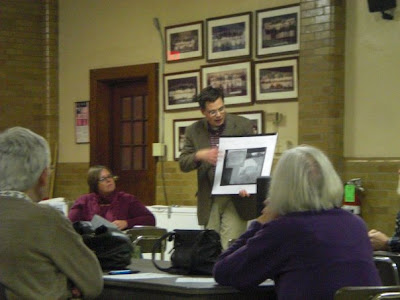 It was fun to observe an author in action because soon I am going to be one myself. I am finishing up the first draft of my book I will have you know. And after that I am going to have to get used to the idea of going around talking about Leonard Pennario.

Steve's book is on the History of Parkside. That is the part of Buffalo where we live. It is a historic area and one thing Steve told us about was how 300 soldiers from the War of 1812 are buried right here in Delaware Park.
That is another picture of Steve Cichon to the left. He is manic!

Last night was memorable for several reasons. For one thing Howard and I had not realized it was a retirement group playing host to Steve's talk. Ha, ha! Here is a picture Howard took of the program. Also because this was a retirement group Howard got a dose of old-guard Catholicism. There was lots of talk about how Steve Cichon is the lector at the 9:30 a.m. Mass and no talk at all about how he is an announcer on WBEN-AM. Furthermore a shout went up when Father came in. Father was immediately asked to say a prayer. I could not catch all of it but it ended in that classic Catholic: "And may the souls of the faithful departed, through the mercy of God, rest in peace, Amen."

For another thing as I sat in the cafeteria of St. Mark's School I could not help thinking about my cousin Howard who was thrown out of that school years ago.

Just last summer I finally got around to asking him, "Howard, what did you do to get thrown out of St. Mark's?" And you know what, he told me but I forgot. Whatever he did, it cannot have been that bad, or I would have remembered.

One other thing about the above picture. Get a good look at my braces. Because they are going to be coming off soon!

I just went to the ortho yesterday.

He took a look inside my mouth and started singing and dancing! I am not making this up. He was dancing and singing and he said that on my next appointment the metal bands in the back of my mouth are coming out and I will be fitted for my retainer.

That will happen on Beethoven's birthday. Which did not surprise me because Beethoven is always with me through thick and thin.

And then on Dec. 30 the braces are coming off!

Just in time for New Year's!

Thanks for coming to my talk. I, too, didn't realize that I was at the tale end of an agenda with many other things on it. Msgr. Braun's prayers are always the best. At 80 years old, you don't get more old school than him.

Well, Mary, you sure do have something nice to look forward to for the new year! I rejoice with you! Singing and dancing, eh? lol I expect you will be joining him in the festivities when the braces are taken off. Yep, yep.

Congrats on the news with your braces... My daughter wishes for the same news soon... I will watch the Pennario on YouTube to celebrate due to it being on Beethoven's b day... BTW, so glad you posted that link a few weeks back...

Hmmm-when we were at St. Mark's (living on Russell Ave.) the pastor was Msgr. Burke. Before he was Bishop Burke. Talk about old school.