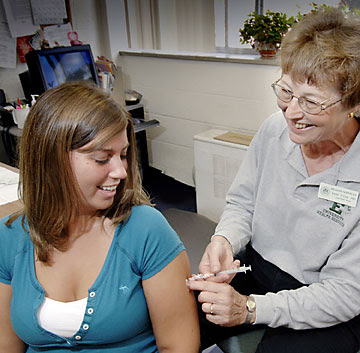 Yesterday I went to the gym and I fell off the machine. There was this machine that has you pulling these weights down from above, and I was sitting there and pulling them down. It was kind of like a rowing motion, only vertical.

And as I am pulling these weights and up walks one of those musclemen who work at the gym. "Let me show you how to do this machine," he says. "You're not doing it quite right."

Then he tells me I am supposed to be arching my back and leaning backwards. And I am trying to obey. Then I just slipped off the seat and tumbled down.

I was lying on the floor of the gym laughing.

On the bright side health-wise, I got my flu shot last week, or whenever it was. I finally got around to it. Howard had to nag me for weeks so I went in to the doctor and got the shot.

It is funny how so many people avoid getting a flu shot and find lots of reasons not to do it. As I was telling my brother George it usually boils down to people do not want to get the shot.

In pictures people smile and laugh getting shots. Look at the picture at the top of this post! Here is another one. 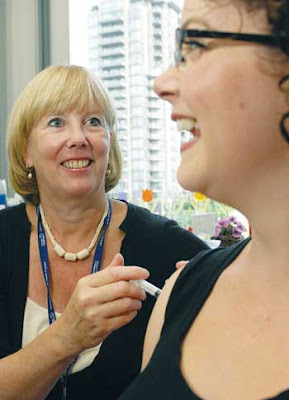 But the truth is, getting shots is not fun and we come up with a lot of reasons to avoid getting one. We do not want to get that shot!

It was the same thing when I was in my 20s and I fell off the Mass wagon for a while and so did a lot of my friends. We had all kinds of rationalizations, from the classic "I don't get anything out of it" to this or that priest was mean to us. It all boiled down to, we did not want to drag ourselves to church. I realized that even at the time although I hated to admit it.

Back to the flu shot. I have to say this year it did not hurt! Well, at first it did. "Stick," the nurse said, sticking the needle in.

Sticking in the needle in. Eeuuuw! I am feeling dizzy writing that.

Then the nurse said, "Burn!" Meaning, it was going to burn.

But after that it was all quiet on the Western front. I felt nothing. By the time I walked out of the office five minutes later I could not even tell where in my arm I had gotten the shot.

"It's going to hurt later," my friends told me. But no, it did not. Not later that day and not the next day either. Never.

No flu for me this year!

Oh, wait, there is always the swine flu.

Cool analysis of the 'reasons' thingy. I learned a long time ago that we always choose our behavior. Yes, we do what we please.

Thus the myth of addiction. But that is another story, lol.