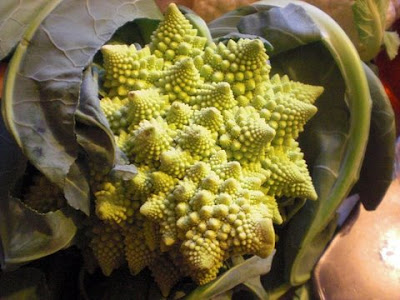 There is still this miracle of nature to be dealt with.

It is a Broccoflower!

Or something like that. All I know is, it is very exotic.

It looks as if it came from the moon!

Howard was amazed by it. I was going to show it to him but I forgot and while I was at church Howard came downstairs and saw it. And he was amazed by it all on his own! He took pictures of it. Above is one of the pictures Howard took of the Broccoflower.

What can we possibly make with this miracle vegetable?

Whatever we make, it cannot possibly taste as good as the thing looks.

It is the Leonard Pennario of vegetables.

It is also called Romanescu cauliflower. Fry some diced onion in olive oil til golden, add the broccoflower and some curry powder. Lower the heat and cook to desired doneness. Yum. The structure of the vegetable is an example of the Fibonacci progression.

How did it taste? Looks quite impressive...never seen anything like it before...