The right man for my mom 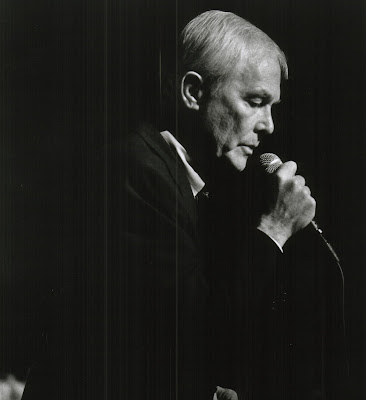 Since my dad died years ago my mother always said she would never get married again. But now she might be relenting! That is because I have found the perfect man for her.

It is Harry Connick Jr.'s father!

There is Harry Connick Sr. pictured above. That's him.

My mother does not actually know him. But lastnight we listened to an interview with Harry Connick Jr. that my mom taped the other day off Canadian radio. And Harry Connick Sr. is perfect!

Number one he is Catholic. As is Harry Connick Jr., who talked about it, and my mother liked that. "I am a Roman Catholic, I go to church every Sunday," Harry Connick Jr. said in the interview she taped. Ergo my mother approves of his family.

I even read years ago that Harry Connick Sr., the district attorney of New Orleans, refused to get involved in the big church scandal because he would not prosecute the church. He seems about my mom's speed on that one.

Not only that, but Harry Connick Sr. sings jazz for fun sometimes and so does my mom. They both have similar taste in music and love Oscar Peterson and Joe Williams and Nat "King" Cole. Who, my mother refers to him as Nat Cole. That is how hip she is.

Both of them were widowed years ago so they would understand each other on that. Plus, Harry Connick Jr.'s father is Irish and the Irish and Germans have always gotten along. He would love a beautiful German woman like my mother.

See? This would work out great.

If my mother married Harry Connick Sr. she might have to move to New Orleans but at least that is a place I would not mind visiting.

He was too hip and savvy not to know about Leonard Pennario!

And I know both he and his dad, being Irish and jazz-loving, would love this.

With which, my question today is: Does anyone out there in Blog-O-Land know Harry Connick Sr.?

Can anyone help me get the wheels turning?
Posted by Mary Kunz Goldman on September 10, 2009

About not prosecuting the Catholic Church:

I'm old enough to remember the pre English language church. I can just hear their prelates going into their pulpits in the face of scandal and telling their faithful something like the following:

(In a sanctimonious tone of voice) "Don't believe the horrible lies you're hearing on the news. It is Satan, attacking Holy Mother Church and the holy and chaste men and women who serve it! All of this is coming from protestants, jews and atheists, who are Satan's followers and all of whom hate us because we know and worship the one true God. Don't listen to them! Fight them and all their works!"

What rot. Connick Sr.have been a loyal churchman, but I would never have wanted him for a lawyer! New Orleans can keep him.

In 1989, Connick and actor Paul Burke (ABC's former Naked City series and who recently died http://www.nytimes.com/2009/09/16/arts/television/16burke.html?ref=obituaries) were indicted on racketeering charges for aiding and abetting a gambling operation by returning gambling records to an arrested gambler.[3] He and Burke were acquitted of all charges after a seven-week trial. But is this the kind of guy you want to be your step-father?