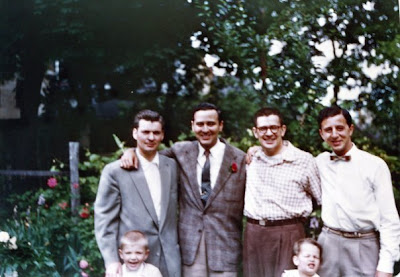 My Facebook friend Elizabeth Martina sent me this beautiful picture. It is of Leonard Pennario with his brother Joe and his godparents' sons, in what I am imagining is a Buffalo back yard. That is Pennario second from left, looking great.

The good-looking man on the far left is Chuck Martina who was at the Buffalo Music Hall of Fame awards ceremony where I met Leonard. In the picture I recognized him right away.

Chuck Martina is the uncle of my Facebook friend Elizabeth Martina.

Pennario used to refer to his godparents' sons as his "godbrothers." He told me that
one of the first times we talked on the phone and I remember him laughing about it. Pennario was the greatest because you see that smile in the picture? He always did have that attitude. When you talked to him you felt you were talking to a young man.

You know who else was like that? Donald O'Connor. 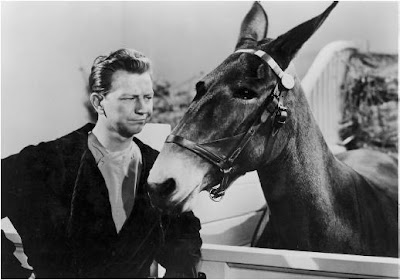 I called him on the 'phone once and he sounded just the way he did in "Singing in the Rain." Which startled me. I had not expected that! I was kind of looking at the 'phone receiver, the way you do when you are puzzled. I mean, here this guy was in his 70s and he had that smart-aleck voice.

Dear Donald O'Connor. When we hung up he said, "God bless you, Mary."

And I had not even sneezed!

These sweet old men. They will break your heart!

With the exception of Ted Kennedy. 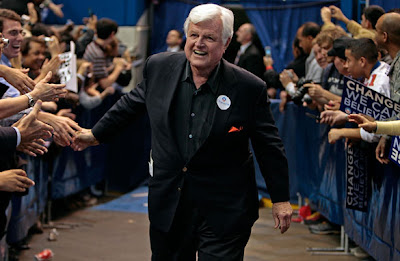 Call it politics, which is what it is.

It is not a self-sacrificing occupation like being a priest or a nun or something. Ted Kennedy did not lead a life of self-sacrifice as far as I can see.

What about Ted's Hot Dogs? 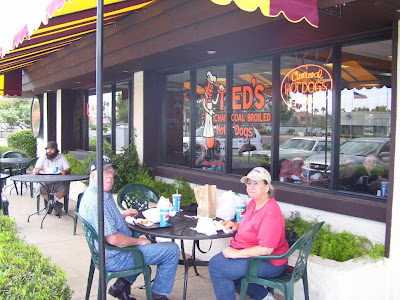 Are those classic Buffalonians in that picture or what?

Oh, dear. The morning is passing and son of a one-eyed sea cook! This Web log is going nowhere fast.

This is what happens when I start looking at pictures of Pennario.

The day disappears!
Posted by Mary Kunz Goldman on August 27, 2009

I agree with your comments on Ted Kennedy.

Bingo! ...You got all three right!

I agree with your comments on Ted's Hot Dogs.

I wonder if Pennario and his buddies in the top picture were smiling because they were going to Ted's after the picture was taken ... could have happened!

I agree with hot dogs in general.