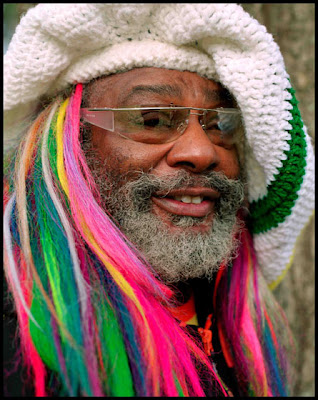 Last night to my friend Gary's for dinner and a bunch of us sat around drinking Gary's homemade wine and listening to George Clinton. That is a picture of George Clinton above. I could not resist the opportunity to put him on the Web log!

What about Clinton's Ditch? That is what they used to call the Erie Canal. Here is a picture of the part of the Erie Canal that ran through Buffalo. 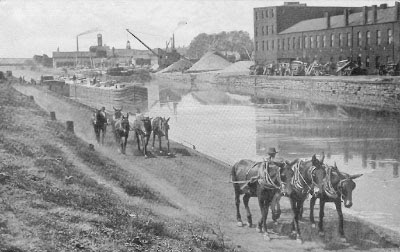 Everyone in Buffalo is in a George Clinton mood because on Thursday he played that big free concert in Lafayette Square. Everyone but me is in the mood, that is. I was not at that concert! I was on Hertel Avenue building cheese towers.

I was the least hip person at Gary's because I know naught about George Clinton. They were telling me that his stage act includes someone called Devoid of Funk, do I have that right?

Then Gary's friend Herb was trying to cheer me up and saying don't worry, if you play piano, you must have funk, because nobody plays the piano without having funk. Herb is black which is why he reached out to me on this. It was so nice of him.

I felt so square!

Plus my mind kept returning to my sourdough bread.

Yesterday after I wrote that breezy post, my Project Sourdough turned sour. Here is how bad things got. I got on the 'Net and Googled "How to make sourdough bread." We must bring back the Victorian apostrophe, I say. From now on it is 'Net, 'cello and 'phone.

That bread I was baking, I ran into real problems!

Number one it was supposed to take 8-10 hours to rise. After two hours it was up to the top of the bowl. What to do?? I wrote that on Facebook to my friend Garaud. He is the sourdough Meister. He is the Leonard Pennario ... 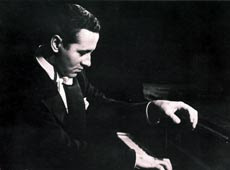 But Garaud did not immediately reply and that was just as well seeing that when he did reply, what he wrote was: "You're on your own, kiddo." So what I did, I decided it was time to get the dough out of the bowl and onto the baking tray.

I had dreams of getting it on to a baking stone. You dust the tray with cornmeal and slide the risen loaf onto the hot stone, is the idea.

Ahahahahahaaa!! I could not even get it out of the bowl!

How in the world are you supposed to invert the bowl and expect the dough to slide out? It will not! That is the last time I am trying that. And do not tell me I should have floured or oiled it, blah blah blah. I did all that.

I am German and I refuse to give up on anything so by the time I was through losing that battle there was cornmeal and flour ALL OVER MY KITCHEN and I am not kidding.

It was time for Plan B. Before I left for Gary's I got two loaf pans and greased them up and shaped the dough the best I could and got it into those pans. When I got back it had risen to the top of the pans.

They have this test. You are supposed to poke your finger into the dough and if the dough does not spring back it is ready to bake. Well, guess what? I poked my finger in and the dough did spring back.

But this was ridiculous. Here it was at the top of the pans. I am not going to have this dominate my life. I already have Pennario dominating my life and there is only so much room at the top.

So I preheated the oven to 400 the way you are supposed to and then I got that bread in the oven along with a gigantic meat loaf I was making for Howard. Oh, wait! There was one more challenge.

You are supposed to slash the bread.

Instinct told me to skip this step. I never have a knife sharp enough. I always think I do but I always mess it up. And do not tell me to use a razor blade. Yuck.

But I forged ahead and did the best I could and into the oven those loaves went. 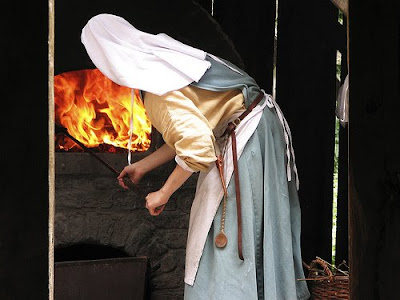 When I peeked, though, the loaves had deflated a little. It must have been the slashing. I should not have done the slashing!

When they came out of the oven, they looked flat and unattractive.

After all that work!

After all that love!

What if after all the work and love I am pouring into the book, the book comes out flat and unattractive?

Well, the good news is that the bread tastes great. It does not look great but the crust has a good crunch, not that I can crunch anything with these braces on my teeth, but I can tell that it does. And it has a nice tang.

I will just have to try this again!
Posted by Mary Kunz Goldman on July 20, 2009

If you cook any more of that bread, I shall have to invest in a larger supply of crying towels to manage the laughter! It sounds like my Twitter update yesterday about the dream (of your bread) was not totally unrealistic? But anyway, I am certain that the book will be a great one!

Oh, and doesn't that Clinton guy play a sax?

Does that mean Thomas Jefferson lived at 'Cello?

Mary, you & Howard are a "joy". I love reading your blog(s). And I now love it even more simply because I actually had the opportunity to meet the two of you. As an example of familiarity (spell?), the other day, I was watching the news and saw the "weather girl" & I also saw a glimse of a woman's arm in a blue sleeveless dress & I just KNEW that was you. I kept thinking, move that camera over... I want to see Mary! But, they didn't - zut alors! Did I say that right? Well, anyway you know what I mean.
Then today w/some time to spare, I googled your name & came up w/such a great article about you In Da Buff. So your Dad wrote too?
And how did you meet wonderful Howard? What's best, it seems to me just now, is whenever I read whatever you have to say, you never appear to be unsettled/anxious. I admire this & also your faith in God.
TC/GB, Toni

Budd, yes, Thomas Jefferson definitely lived at 'Cello! I like drinking the occasional 'Cello, too, after dinner over ice.

Larry, I did try Googling. That is a whole other story!