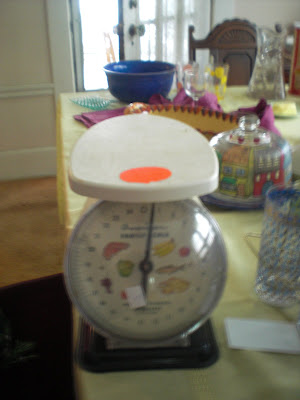 Congratulamini mihi! That is Latin for "congratulate me." As if you could not have guessed!

Every week when I go to church there is some phrase that I get a kick out of and yesterday "congratulamini mihi" was it. It is what the woman in the parable says when she has 10 coins and loses one and finds it. We usually translate it as "Rejoice with me," and that is how my prayer book translates it too.

But I prefer "Congratulate me." Because that is what it means!

So. Congratulamini mihi, for I have found a wondrous kitchen scale. That is it pictured above! I found it as an estate sale where I went with my mom on Darwin Drive in Snyder the other day. It cost me only a buck.

Howard covets it for Big Blue.

That is a picture of my new scale above. Zounds, the picture is blurry. Something on my camera is not set right. When I am not in such a hurry, later today maybe, I will have to correct it and take new pictures.

There is also this Osterizer. 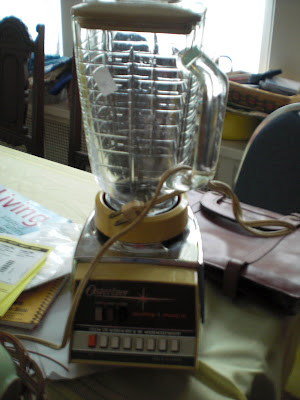 I bagged that for $4! I had a vintage Osterizer already, and it was a good ol' wagon, but now it done broke down. I am very fussy when it comes to blenders. I want a vintage blender, and I want an Osterizer. So now I have this new one. Well, new in a manner of speaking. New to me!

After the estate sale my mom and I stopped by Goodwill where I picked up a fine pile of tapes. I may have mentioned the Goodwill cassette department last time I was there. It was as if a piano nut unloaded his whole collection. There was all this dandy piano music. Last time I was there I bought $10 worth. That would have been 20 cassettes! But I kept thinking of treasures I had left behind, what with my mom watching over my shoulder and everything.

Specifically I was remembering Guiomar Novaes playing Chopin Nocturnes. What had ailed me, not picking those up? So I was happy to return to that Goodwill because even though it was a month later, I figured those Nocturnes would be there.

Which they were! Along with other treasures. I walked out of there with 14 more tapes! They are great to take in the car or on picnics or to the beach. And I am thinking I might scrounge around the house for my old cassette Walkman. I want to be the only person still running around with one.

I am looking through the bag right now. I got Emil Gilels, Alfred Brendel playing Beethoven, Robert Casadesus playing Satie, Barry Douglas, Charles Rosen playing Stravinsky and Schoenberg, Earl Wild, "Wild About Liszt," Vol. 1, etc. I got "Wild About Liszt" Vol. 2 last time and did not see Vol. 1. How lucky it was that I went back.

And the gem of the haul: the Leonard Pennario/Erich Leinsdorf Tchaikovsky First. It is out on Seraphim. I had a funny conversation with Pennario about that but that will have to wait.

Wow, this tape also seems to have Pennario playing a bunch of solo Tchaikovsky piano pieces! A fine find.