If pork chops be the food of love... 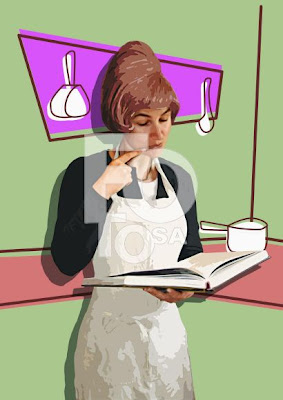 About those "racist and sexist" jokes emailed by the unfortunate gentleman in Lewiston-Porter: Did anyone else have fun reading the rundown of those jokes? Especially the supposedly sexist jokes about women.

"Why does a woman need a watch when there is a clock on the stove?" That was the gist of one of them.

Another one suggested that women had smaller feet so we could stand closer to the sink.

Is there any woman who honestly gets upset over those jokes? They are not the cleverest jokes in the world but they do not offend me, I will tell you that. You would have to be pretty pathetic to be offended by those jokes, is all I can think.

Here is a picture of Howard and me pursuing our respective hobbies. 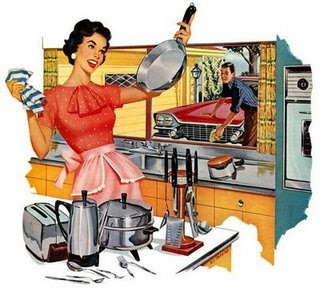 I even brood about what food will win Howard's approval! That is how un-liberated I am. Remember the infamous steak incident?

It is impossible to guess what food will win Howard's approval. That is a picture of me at the top of this post trying to figure it out.

And this is true too: Sometimes I get the idea Howard eats dinner and does not notice he is eating. He will be talking and talking about Big Blue or his Javelins or something and I will want to say, "Stop! Do you notice what you're eating? Do you notice the carrots are cooked just right -- just soft enough, but just enough crunch? Do you taste the caramelized onions?"

Leonard Pennario was a food person, I will tell you that. Goes to show why I could not lose any weight when I was in California even though I used to work out constantly in that gym while listening to his Chopin and his Schumann.

Where was I? Ay me! I cannot concentrate.

Howard and food! When he likes something he really likes it, I will say that for him. But it is unpredictable.

There was one night we had to eat in front of the TV which we almost never do. It was because of one of the presidential debates last fall. Anyway, I did not worry too much about dinner and I made a pizza with, I don't know, eggplant and tomatoes, something like that. And lentil soup.

And Howard is scarfing it down. "This is great!" he said.

And I'm sitting there thinking, what in the world, here is this no-fuss dinner, completely vegetarian because that was all I had, and look. You never can tell.

Which brings us to the other night. This was before going to hear Mahler's "Resurrection" Symphony at the Philharmonic, and we are always in a rush before Philharmonic concerts so I never worry very much over those dinners. They rush past unnoticed. They are not much fun to cook.

So when I stopped by the Hertel Farmers' Market I grabbed some pork chops. They are quick. I got the boneless kind because they were cheaper.

I go home and there is this Cooking Light recipe I tore out from a few years ago for spice-rubbed pork chops. I had to go through a little trouble. I could not help it. But it took maybe five minutes. I make this spice rub and I toss the pork chops under the broiler the way they tell you to.

And Howard takes one bite and he flips!

Would you believe, it is the humble pork chop? That is what I told him.

"But it's so delicately cooked!" he exclaimed.

Pork chops were created to be coated in flower and garlic powder, and very slowly fried brown, even slightly black. Try one of those on him! Southern tradition? Nope, just mine, lol!

Pass on the pizza though.