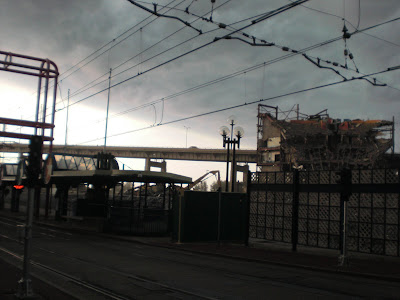 Yesterday after meeting former Common Council president George K. Arthur and African Cultural Center director Agnes Bain for lunch at the City Grill. And when we emerged the sky was as dark as night!

A storm was brewing!

As I ran back to the office the wind whipped. My skirt was flying this way and that and I had to take shelter behind the wall of one of the trolley stations to get out my camera. But it was worth it. Can you believe that picture above? It looks like Armageddon!

Clouds of dust filled the air because of the destruction of the Memorial Auditorium. That is the Aud on the right in the picture at the top of this post.

Here is a closeup of our city's handiwork. 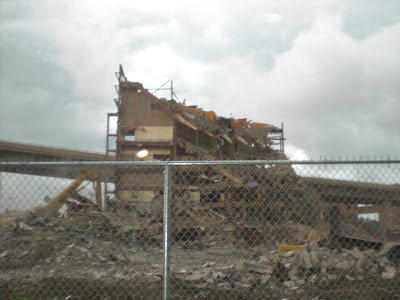 The Skyway stood out in sharp relief.

Such stormy skies! I was lucky to make it back to the office right before the rains came down.

Speaking of frightening sights, you would think that in eulogizing Michael Jackson, Fox News would have been able to come up with a more flattering picture than this.

That was a shock yesterday, losing the Gloved One. My brother George called me about it. I have to say this: I do not quite understand or appreciate Michael Jackson's art. I cannot quite see what makes him great. I mean, with me it is not like Leonard Pennario, where it hits me right in the face.

But I admire his skills and success as an entertainer and how he was able to market himself. And he was a first-class weirdo which I also admire. As Howard said, Jackson was one of the great weirdos of the last century. Perhaps the greatest. As for the new century, the competition promises to be keen, so the jury is still out.

I feel nostalgic for Jackson as a part of my growing up. I even had a "Beat It" nightshirt. I picked it up somewhere and I slept in it when I lived in my haunted apartment on Parkside.

Leave it to me to get the conversation around to food!

One thing, this hysteria over Jackson, I wonder how long it will go on. It has become like a religion with some people, mourning these pop culture figures. Think back to when Princess Diana died, the endless zeal with which people mourned her. It is still going on!

With which, here is a still life featuring our E.B. Green-designed edifice visible behind one of our trolley stations. 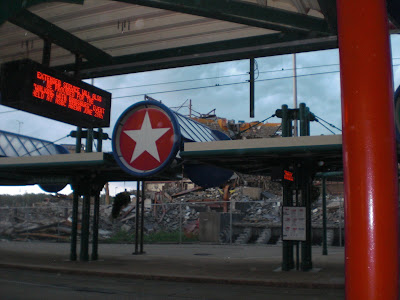 Here is another shot of it with the sky. 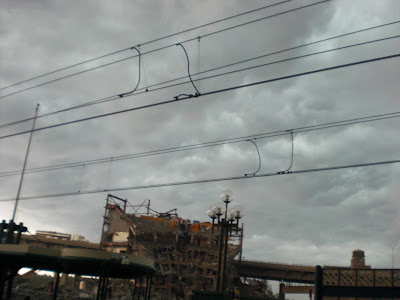 What a dark and dramatic day! Later on last night the light was still weird. I took this picture of Howard in the driveway. 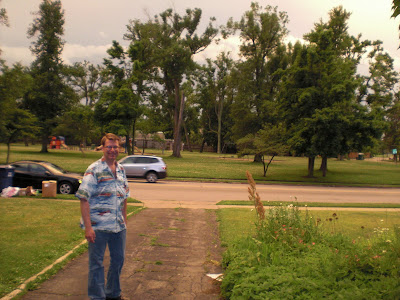 I ended the day relaxing in Howard's new smoking chair. 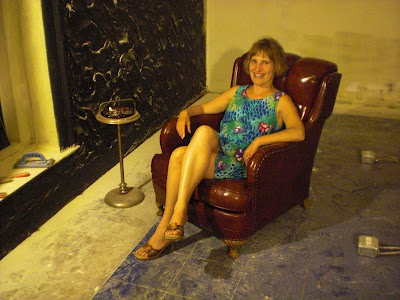 Howard did a picture gallery of the chair's odyssey from the bus station to Big Blue that has me laughing and laughing! You can view it here on his Web log.

It was an honor to sit in the chair after viewing Howard's gallery.

A dramatic end to a very dramatic day!
Posted by Mary Kunz Goldman on June 26, 2009

That is a cool picture of you in the new smoking chair with the antique ashtray. However, something seems to be missing. Perhaps a stogie?

Pennario's 'Midnight on the Cliffs' from the first link, worked well while reading today's blog. Funny how that works.

I am with you on the Jackson hype. It was always impossible for me to even be able to stand watching him, and his music was rubbish to me. King of Pop? To me, just 'King of Freaks'. But I will admit, the death of Farrah Fawcett brought a tear to my eye. RIP Farraw.

If I were Jewish, I'd say "Jackson, Schmackson." It still sticks in my craw that when one of my heroes - Groucho - died in 1977, it got almost no coverage because he conked out shortly after Elvis. And the Marx Brother revival was still big back then.