The autumn of the Aud 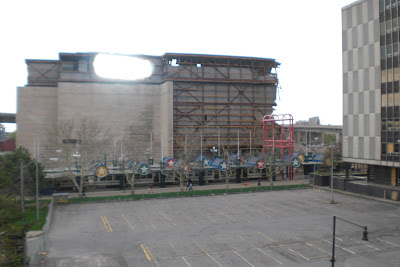 That is Buffalo's Memorial Auditorium above, as seen from the window of my office. That bright oval is my camera flashing! Other than that, you are seeing it the way it is.

The Aud is coming down with noise and drama. There are big clouds of dust and loud crashing noises. It is like something out of Scripture. Like a plague. I resent seeing the Aud come down. It was a beautiful and graceful building and it should not have had to go.

While this building next door to it stays. 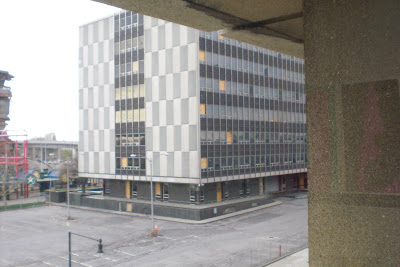 Yea, verily, this ugly '60s building, naturally we were able to find a way to reuse that. And the K Mart across from the Broadway Market, last week they announced that had a bright future, as a performing arts center!

That is the greatest. Here we are with all kinds of grand 19th century churches left for dead, because how many performing arts centers do you need? But oh, the K Mart, it gets a new lease on life.

Back to the Aud. I hate losing it. One of my friends pointed out that it is interesting to see its innards, how it was built. But to be honest I would rather admire those innards while they are still innards, you know?

I do not like having to watch the Aud's destruction every day. I do not care if it was worn down or that it had that ugly addition put on.

It is a little like losing Crystal Beach which, I did not like to break the news to Leonard Pennario that that was gone. 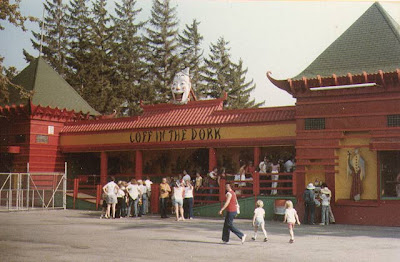 What about Sandy Beach? 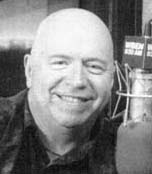 I should not keep feeling sorry for myself. Yesterday I was walking through downtown Buffalo with my friend Melinda and we began talking about all the hearts that were broken generations ago when the Main Place Mall went up.

Imagine the buildings that went.

In exchange for this! 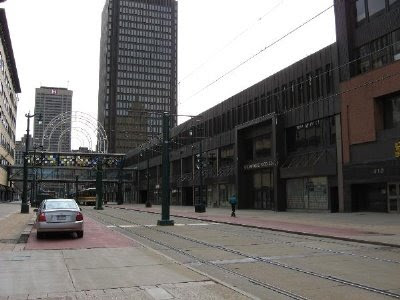 Beautiful buildings made out of gold and marble came down to make way for Main Place Mall. And Melinda's dad told her that when the Elm/Oak corridor went up downtown, dozens of beautiful palatial old brick homes had to go.

What do we have now? 1960s office buildings. Note to out-of-towners: If you do not know what the Elm/Oak corridor is you are not missing much.

I have to admit I do not feel so bad about Frank Lloyd Wright's Larkin Administration Building ... 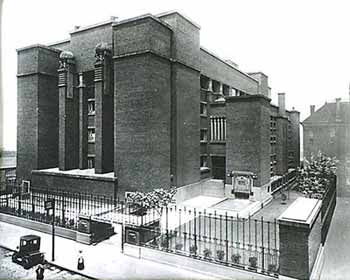 ... which, someone has to say this, looked like something out of Nazi Germany. But still, I would rather we had it instead of what is now in its place, which is a parking lot.

We love knocking things down here in Buffalo. Now we have the Skyway dodging bullets. 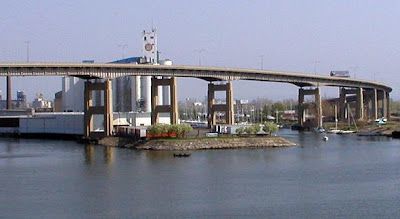 What is it about knocking things down? Perhaps it gives us the illusion we are getting something done.

Speaking of which, I am getting nothing done! That is what happens when you start talking about the Aud.

Your day disappears in a big cloud of dust!
Posted by Mary Kunz Goldman on May 06, 2009

If you'd like to read more about the demolition of the Larkin Building, visit http://www.buffaloah.com/a/lark/hp.html

Just last night the volunteers and I cleaned up the "park" at the remaining building pier, which has a marker indicating the story of the building.

Jerry - one of your faithful daily followers

It is not only in Buffalo! The same thing is happening here as well. Maybe it is a tax thing... or maybe I am just getting too old.

What is it about knocking things down? It's all cash flow. Put out a contract to build, put out a contract to demolish and replace. Less work than repair and reuse, which is an affront to contractors and planners. Their vanity needs to erase anything that they didn't make. But a caveat: most political conservatives are profit minded and sneer at preservationists, reusers savers and such fuzzy-minded visionaries...bad for business and unAmerican.

Prof G:
Having a bad day or what?

Anonymous,
They're ALL bad days!

It is a strange feeling watching the deconstruction. I hadn't thought much about it until the end came off. The building certainly had a personality. I wish instead of letting it rot for 13 years, the city would have been a little more proactive and imitated Montreal and found a way to reuse it.

The Aud had a personality and what bugged me especially about losing it is that there are so few, ahem, stadia of its vintage left. Knocking it down is terribly short-sighted.

Prof. G, as if there are any political conservatives in power in this town..