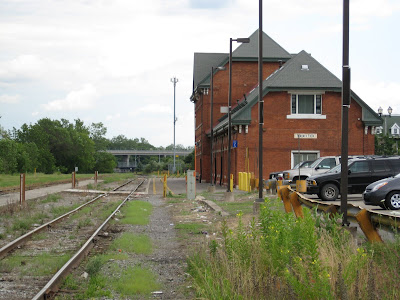 There is this Facebook group I have joined called simply "Kunz." As the person who started it states: "This is a group for all the people that are named Kunz. Who knows ... we might be related."

The group's founder has an amazing name, Ewalina Kunz-Barkhouse. She is from Toronto.

You would never find a name like that in America. Anyone else notice, you cross the border and the names are different? Stanley Avenue. That is where the train station is in Niagara Falls, Ont. Many many cliffhanger moments have I passed trying to find it in time to catch the train to Toronto. Above is a picture of the VIA station in Niagara Falls, Ont., where on a number of memorable occasions I came flying out of my car and onto the train.

You would never find a Stanley Avenue in Buffalo. I do not know why. I cannot put my finger on it. But it is the truth.

Names we have in America that they would never have: Rizzo. Kwiatkowski. Pignataro. Does anyone else love that name Pignataro? That is one of my favorite Italian names.

You would never find the name Pennario in Canada either. That is a Buffalo name, not a Canadian name. Well, Leonard Pennario is just about the only Pennario anywhere, aside from his brother, Joe.

How did I get onto all this? I was talking about the group that I joined, Kunz.

The group boasts a few celebrities. There is the 28-year-old Russian pianist Eduard Kunz, a front-runner in this year's Van Cliburn International Piano Competition. And Anita Kunz, who draws pictures for the New Yorker. We also have our own gemstone, kunzite, named for a Dr. George Kunz who used to be head gem expert at Sotheby's.

But otherwise, what makes this group so funny to me is that the name Kunz is so undistinguished. It is like "Jones" in Germany. It means next to nothing. What it is, is a short form of Konrad, another ancient and common name which breaks down to "Kuhn-Rad," or "bold counsel."

There is a German saying, "jeder Hinz und Kunz," which means "every Heinz and Kunz," the English equivalent of "every Tom, Dick and Harry." 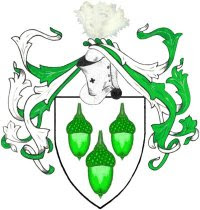 Yet in the Facebook group Kunz it is exalted!

Someone has come up with a Kunz coat of arms. I believe Ewalina Kunz-Barkhouse came up with it. That is a Toronto thing to do, come up with your coat of arms. Just like all the Scottish people they have up there are always looking up their particular plaids and everything. A great industry has grown up around that! That is the Kunz coat of arms pictured above. I like the three little acorns. Kunz is an acorn of a name, small and unpretentious.

But what about ACORN? I would not want that aura of corruption about us!

The Facebook group Kunz has 234 members and what is funny is, on the message board, you see them coming forward one by one, like medieval envoys carrying banners. Often they simply and proudly report where they are from.

"Kunz from Switzerland." There are a lot of those. The name Kunz dominates not only in Germany but in Switzerland and Austria.

"Kunz from Argentina." There is rather a great number of those which makes me worry. What if there was an ex-Nazi named Kunz who moved to Argentina? And these are his progeny? How would we treat them at the Kunz family reunion?

As if I do not have enough to worry about.