The pest and the pesticide 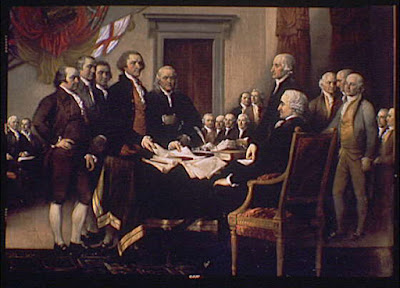 Usually I do not comment on, ahem, politics. But this Arlen Specter, switching from Republican to Democrat.

Don't our elected officials have some responsibility to their constituents?

If you get elected on a certain platform, if people vote for you because you are this or that, what gives you the right to make up your own little mind for yourself later that you are not going to be what you told them you were?

Everyone seems to have forgotten the purpose of Congress as it was founded. That is a picture of Congress above. It is kind of an old picture because I think if I used a current picture my head would explode.

Our much-glorified Congressmen are actually our humble representatives. They are supposed to communicate to government the views of their constituents. That is why they are elected.

Instead we are increasingly seeing them running around like little emperors, unaccountable to anyone, changing their minds as they see fit. Their only concern seems to be whether they get elected the next time around. And that is a little check-and-balance system there, better than nothing, I guess. But still. What about now?

You were elected to do a certain job, in a certain way, now.

It is not fair to change your mind after somebody trusts you!

It would be as if I had elected to get that unpaid leave from work to go and see Leonard Pennario in California and Pennario had told me, when I got there, "Oh, sorry, I changed my mind. I have permitted Joe Blow, from The New York Times, to write about me instead."

Oh, well. If there is one thing I am learning it is that no individual has a voice any more. No one cares what I think. So to cheer myself up here is what I am going to do. I am going to go to Adams Nurseries and buy myself some pesticide.

Actually I am buying the pesticide for Howard. He is the keeper of the apple tree. We have an apple tree in our back yard and today Howard is going to spray that baby.

What about Fiona Apple?

Once we sprayed our apple tree and we got four big liquor store boxes of Golden Delicious apples. This was before the White House, ahem, Victory Garden, too. We had the idea all on our own! Occasionally you can have your own ideas without government telling you what to do.

Let us not get so angry about all this that we neglect to click on the Pennario link above and hear him playing the magical slow movement from the Schumann Piano Quartet. That is Eudice Shapiro on violin. She was from Buffalo too!

The most enchanting moment is 1:41. That is when Pennario gets the melody.

It is guaranteed to take your mind off your troubles.
Posted by Mary Kunz Goldman on April 29, 2009

That Schumann Quartet is one of the most amazing things ever.

Mary, you had better stop having your own ideas too. That is not being 'politically correct'.

Senator Spector is one of the most liberal Republicans in the country , and I could certainly understand that he might feel out of place in today's Republican Party, which has become less than popular in the Northeast.

Personal to MKG: I wouldn't touch this Spector post with a ten foot pole...or a six foot Irishman!

Oh Mary, we traded joe lieberman for Spector as the senator to be named later deal. I think we got the best deal you can keep Joe we dont even want him back. Did you watch him hugging McCain at the convention? Now please go back to posting about drinking booze.

but MKG, as Specter said in his announcement, literally hundreds of thousands of Pennsylvania voters had switched their affiliation from R to D in the past year or so. The Republican Party was also forcing him out by sponsoring a hard-right primary challenger.

So he switched. but the voters will have a chance to judge him for that, next November. If that switch represented the feelings of the people of PA, he'll get re-elected. If it doesn't, he won't.