Yesterday my friend Lizzie cooked with me at the soup kitchen and after that we went out to the Sportsmen's Tavern. We do not like to go straight home after doing the soup kitchen. Always, we go somewhere! And Buffalo being Buffalo, we have a lot of options, even on a Sunday afternoon. There are a million places with live music and there is no cover. You drift in and out at will.

First we went to the Sportsmen's Tavern, which I am always proud in reporting is down the street from my house. It has a beautiful tin ceiling and a wide selection of box wine. In my case the bartender fished around and he found a tiny airline bottle of merlot. "It's chilled," he said apologetically. But it was good!


Zut alors, it looks as if I am drinking a full bottle! But I was not. It was just an airline bottle, honest!

From thence we proceeded to the Elmwood Lounge where we heard Joey Giambra. Remember Joey Giambra? He was the one who interviewed me about Leonard Pennario for the movie on Buffalo's Italian immigrants. And made me feel as if I were in "A Chorus Line"! Joey Giambra is a former police detective which explains why he was able to question me so shrewdly about my time with Pennario and my relationship with him. Since then he has been going around telling people that I was the best interview and the movie is going to be a big hit because of me. I know he is saying that because Jocko told me the other night.

Ha, ha! Remember, the best moment was when I started crying and told them to turn off the cameras. 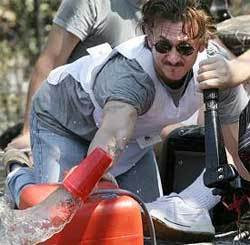 It was sort of stressful at the time but now I am kind of proud of it all. And I have to say this, I respect Joey Giambra tremendously for his interviewing abilities.

Here is something else I respect about Joey Giambra that I do not think I have mentioned yet on my Web log. He refers to Pennario as "the Nard."

Is that not the coolest thing you ever heard in your life?

No wonder during the interview I started weeping! I am sitting here just writing this shaking my head in awe over the coolness of it all. Joey Giambra is allowed to refer to Pennario like that because they are both Sicilian guys from the West Side.

Where was I? Oh, right, the Elmwood Lounge. That is our beloved and retro Elmwood Lounge pictured at the top of this post. Joey Giambra is at the right with his trombone. Next to him is our friend the saxophonist Carol McLaughlin. He is from Jamaica! I used to go over to Carol's house on Peach Street when my friend Mary used to take saxophone lessons from him. She would toot on the saxophone and I would just sit around. Wow, that was what, 20 years ago? But Carol never changes.

To the left of Carol is the wonderful saxophonist Brian Bauer aka "Dr. Jazz." He has the greatest glasses. He told me he wanted authentic round 1920s-looking glasses and he finally found a place on Delaware Avenue where he could get them.

Who am I forgetting? It is Monday morning which, you know me, is not the best time of the week for me and my Web logging.

And this is going to be a strenuous Monday, I will say that! Lastnight I had work anxiety dreams. I dreamed I had to address a group of piano teachers at 6 a.m. this morning at Denton, Cottier and Daniels. And I was supposed to bring a green bean casserole. I love how the dream threw that in.

Turn the cameras off.

We would have welcomed you with open arms here at DCD! No casserole required. We would have rolled out the red carpet. It would have been lovely...

Your Sunday sounds so wonderful; so "Buffalo." The best kind of Sunday.

Dr Jazz is playing with Babik at the May fundraiser here. Isnt that the best?

Palm Sunday and all you could write about was taverns? No mention of reflection on your saviors impending death? You see why mixed marriages are bad, Howard wants you to forget that his people killed him, he will make you believe it was Pontius Pilate decision.

Aren't you in a mixed marriage - because your husband married a nut?

Howard your chivalry is quite charming. :)

After reading Anonymous: I'm so glad I'm a freethinker. Howard, since you seem to know the gender of the writer, what's your thought about outing her?