The man that got away 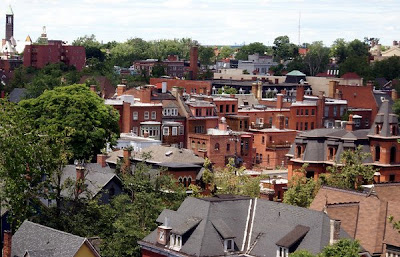 Today I am late Web logging because of this life-changing project I have been involved in. Sometimes it feels it will never end. But it is so exciting.

Yes, the book on Leonard Pennario, you say. How is it coming?

I have been cleaning my house!

You would not believe the stuff that has turned up.

Here are some things I have found. Two Burt Bacharach albums ("Make It Easy on Yourself" and "Burt Bacharach's Greatest Hits"). A twenty. A roll of undeveloped film from God knows when. A great CD of Bach's Mass in B Minor by the Netherlands Bach Society. I had no idea I had that.

I also found my beautiful bedroom slippers I had been missing forever. These are the slippers that my mother bought me back when I had signed the papers to buy a house in Allentown. I almost lived in Allentown, I do not know if I ever mentioned that. That is Allentown pictured above. Strange, it reminds me a little of yesterday's picture. Of the pirate city of Eyl. In the lawless land of Somalia!

I found this house in Allentown 10 or 15 years ago, when I was initially house hunting. Zounds, I cannot believe how the time flies.

And it was not simply in Allentown. It was on Irving Place which, note to out-of-towners, Irving Place is one of Buffalo's most exclusive streets. The address was 39 Irving Place.

My almost-house was a beautiful Victorian with double doors in front and a long staircase up the side when you walked in. The kitchen tilted slightly which I thought was very romantic. The house had been a boarding house at one point and it had about 15 bathrooms. I loved that aspect of it.

It was near St. Louis Church which was where I was going to Mass at the time. Here is a picture of the statue of St. Louis that I love that stands in the front of the church. St. Louis died on a crusade in 1270. 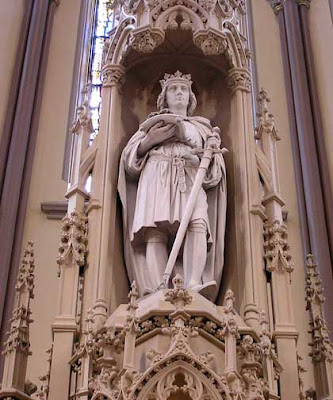 What about the St. Louis Blues? I love how Billie Holiday sings it with her flat A's. "That maaaan's got a heart like a rock cast in the sea..."

Oh, my house in Allentown. I also loved how Gabriel's Gate ... 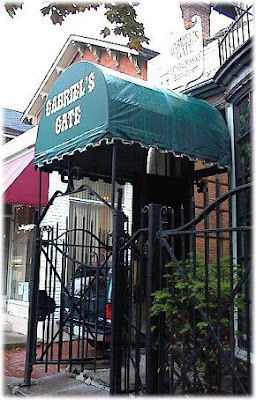 ... was only a few steps away. I imagined going there of an evening, having a glass of wine, getting to know all the bartenders.

Anyway, I fell in love with the house as soon as I walked in to it, never mind that there was no way I would ever be able to get my big old 1905 Model M-for-monstrous Steinway into the living room. Fiddle dee dee, I would think about that tomorrow. Then I must have had a kind of beginner's luck. Because I dived in and bid on this house and all of a sudden I had this unbelievable deal going.

The price we settled on was so low that now I cannot even remember it. It was around $110,000, I think. Here is what I do remember: It was so low that I went to a party and to my horror I heard my house deal being gossiped about! The gossipers did not know the name of the buyer but they were whispering about it, how this house on Irving Place was going for whatever the price was.

I remember shepherding the people I was talking to away from that conversation, so they would not hear it! I was so afraid someone would throw a wrench into my deal.

Which, eventually someone did throw a wrench into it, and it was the old lady selling the house. She began removing items from it. The doorknobs. The chandeliers. Suddenly they were not going to be part of the deal.

The long and short of it was, she did not want to sell the house. And eventually I got the message that it was hopeless and I backed out. I cried. It was terrible.

Then they tried to get the deal going again but by that time I had found the house where I am now. I loved this house, which was built in 1920, in a totally different way. It welcomed my Steinway. There was a garage, whereas the Allentown place had had only a driveway. It was a safer area, too, which I should have been thinking about more seeing that back then I was as single as the day is long.

To this day I feel funny passing that house on Irving Place. It is like seeing an old boyfriend!

I wonder how things would have gone if I had moved into that house. I find myself contemplating that question dreamily, listening as I am to the Pennario link above. (Here it is again. I am always good at giving them again so you do not have to scroll back up.) That first waltz he plays, so nostalgic. Whenever you hear a waltz like that, you have to think of someone you loved very deeply.

Or, in the case of me this morning, something you loved deeply.

Isn't it a funny thing about houses?

You can fall in love with them as if they were people.
Posted by Mary Kunz Goldman on April 15, 2009

We also fell in love with a turn of the century farmhouse in Wales that my wife casually knew the owner of. After the home inspection there were some issues uncovered that we asked for a modest $5000 discount towards repairing (which certainly would have cost at least double that). The owners weren't willing to budge on the already overpriced house, and we had to rescind our offer. It was heartbreaking, but the right decision in the end. They too didn't really want to sell the house, as they flat out told us so, and weren't willing to part with it for a decent price, even after it's flaws were pointed out.