Sunday in the Park With Wolfgang 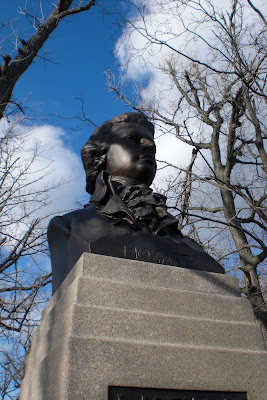 Every morning on my way to work I pass the statue of Mozart in Delaware Park and I get such a big kick out of it. I love his Heinie face. That is a word I am allowed to use, Heinie, because I am German American.

You know who else had a great Heinie face? Babe Ruth. I have often sat at that jam session at Bobby McGee's staring at a poster of him and thinking that. 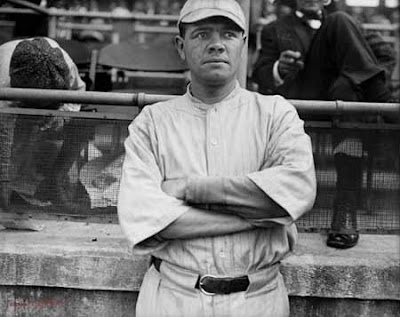 Wow, look at Babe Ruth and then look at Mozart! They have the same heavy, grave look. They could be twins! 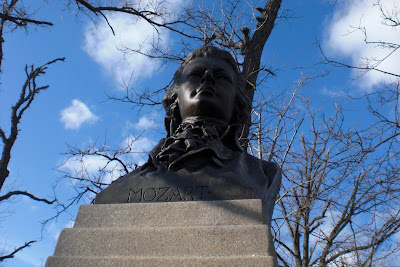 I took the pictures of Mozart just now while I was out for a walk. The light is not that good but I could not fuss with it because it is actually very cold today and my hands were freezing! That is a beautiful blue sky though. You have to give me that.

The Mozart statue was put up in 1894 by the Buffalo Liedertafel as you can see on the plaque. "Liedertafel" is German for "song table," or "song circle." 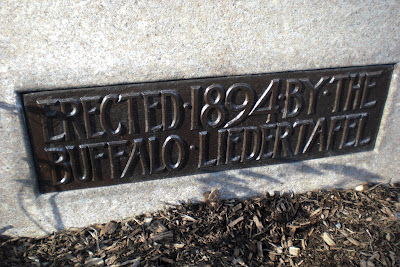 People in Buffalo love to fix things that are not broke, and a few years ago there was talk about moving Mozart to Kleinhans Music Hall to sit out front with Chopin and Verdi. I didn't want that. They would make a strange trio, those three. Plus I like Mozart where he is. The German word for statue is "Denkmal" which means, more or less, "think for a moment." When you glimpse Mozart from the Scajaquada you think of him for a moment. I think he must like that. If you were at Kleinhans you would be thinking of him anyway.

Probably the reasoning for the proposed move was that these three would represent three of our big immigrant groups, the Germans, the Polish and the Italians. That is what I am guessing.

But what about the Irish? We would need a statue of John Field. 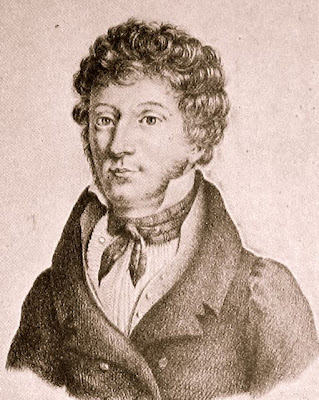 Also I think the Italians would be better represented by a statue of Leonard Pennario.

Do click on that link and savor a few more of Pennario's Chopin preludes. I am so grateful to the Pennario fan who just posted these performances on You Tube! I have already made friends with him. His name is Larry.

Pennario's Chopin, it is magnificent.
Posted by Mary Kunz Goldman on March 01, 2009

The one thing that gives me a giggle is the statue of David by 'Michael Angelo.' Good old Mike.

I have to say I never knew that statue was there.