The loud and gloating voice 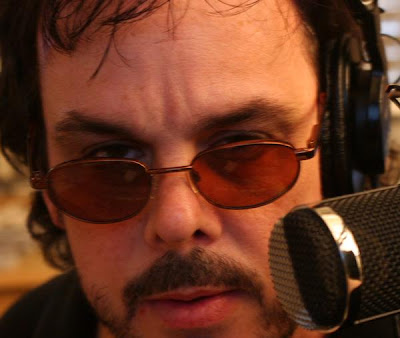 Calamity has struck! We have lost Brian James. I did not know his name. But I sure knew his voice. That loud, gloating voice! There was nothing else like it.

"This overnight guy won't put you to sleep! He might even scare you!" That was Brian James, talking about "Coast to Coast with George Nori." Howard likes to listen to that late-night show. A couple of times I had to make him turn it off because I cannot sleep listening to talk of aliens and flying saucers and voices from the beyond.

"Because the weather in Western New York can change in a minute..."

"Now you don't have to wait for the paperboy..." That one used to bug me being that I am a newspaper gal.

That is Brian James pictured above. I cannot imagine WBEN-AM without him! Who are they going to get now? Probably some woman. When these guys go they always replace them with women. Look at the Metropolitan Opera broadcast. That is what happened there.

You can listen to Brian James here. He was only 48, I am reading. He sounded older. He had a heart attack and I wonder whether having to sound geared-up all the time had something to do with that. Maybe it is impossible to do what he did and not be geared up in real life. In any case, a memorable voice stilled. There will be a silence in our lives.

We used to think Brian James was local and I always remember when it was I found out he was not. That was when my friend Rick Stanley, an editor I work with, went on vacation to Florida. He came back and reported that he was lying on the beach there and that voice -- that was how we referred to it, that voice, because we did not know Brian James' name -- came out of the radio.

We marveled at that.

I have become a WBEN fan since marrying Howard. He is a big talk radio fan. Normally in the morning we have Tom Bauerle on and we turn it up so his voice blasts over the splash of the shower and the noise of my Water-Pik. Howard can do a good imitation of Barbara Burns. There is that too.

We have a lot of jokes that come from WBEN. That is how big a part of our lives it is. During the infamous October Surprise Storm -- this would have been October 2006, a year before I met Leonard Pennario -- Howard and I were cooped up over his garage. Here is a picture of Howard's garage. We call it Goldman Motors. 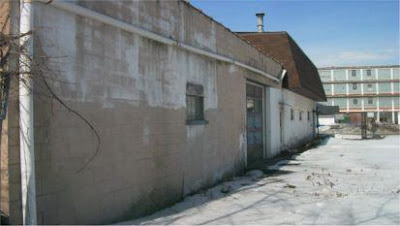 The power was out but we had the radio on, running on batteries. At one point, someone was making a particularly dire announcement, something about how our power would not be back on for possibly weeks, how the crews were delayed, I don't remember exactly what.

What I do remember is that after he made the announcement, a woman on the air chirped up cheerily: "Absolutely, Dominic!"

Ha, ha! She was probably so tired and punchy she hadn't heard what he said. Or maybe it is just the Buffalo way of dealing with this stuff.

Whatever the reason, Howard and I still say to each other, on occasion, "Absolutely, Dominic!" It can make you feel better at times of great stress.

This is, alas, one. We are going to miss Brian James.

I have to agree, I always "just assumed" he was a local guy too. I thought he had a great voice and I really liked those announcements he made. You are probably correct about them hiring a woman, and then to top it off they will probably try and pay her LESS to boot!!!