Twists of the tongue 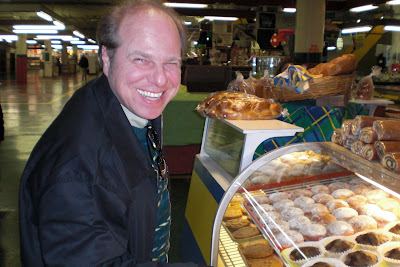 Above is a picture of the great comedian and community activist "Airborne Eddy" Dobosiewicz at the Broadway Market over the weekend, looking maniacal. Eddy gets that way when you get him around sugar which was the situation when we ran into him.

You say Eddy's name "Do-bo-SHEH-vitz." That is what I am learning.

My friend Jane and I had gone to the market as usual to buy sausages and I also bought a soup chicken, at Malczewski's Poultry. You say that "Mal-JEFF-ski." As I said I am learning. When we ran into Eddy he was carrying a gigantic pork roast.

"What are you buying that pork roast for, Eddy?" Jane asked.

After shopping we decided to go to the Three Deuces, where, remember, Jane and I went last week. But trouble struck in the parking ramp! Jane's car would not go. She has an Element which my friend Gary calls "the clown car" because it looks like the car that clowns pile out of at the circus. It would not go.

There followed the inevitable Buffalo search for jumper cables. Eddy was already down the street at the Deuces and he polled everyone there but nobody had them. So Jane had to call Triple A.

I wanted to take a picture of Jane in her Element while we were waiting but something told me she was not in the mood for that. So instead I took this picture from the parking ramp, looking down Gibson Street toward the Three Deuces. 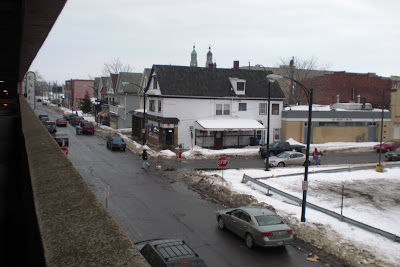 Isn't that beautiful? Like Ansel Adams! Observe the spires of St. Stanislaus rising in the background. Here is another view from the parking ramp looking in the other direction down Gibson Street toward Broadway. 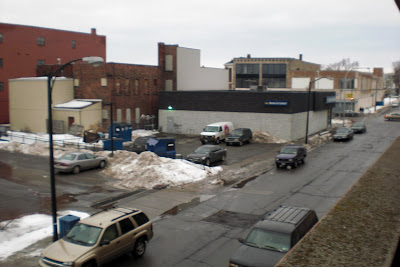 Triple A told Jane that they would call her within the hour. In the meantime we got in my car to drive a block over to the Three Deuces. That sounds like an ugly American thing to do but the problem is, they close the ramp at the Broadway Market at a certain time and if that happened we did not want both cars to get stuck there.

The Broadway Market is in a transitional neighborhood and when we got outside we found that our way to the Three Deuces was blocked by a cadre of police cars. No problem, we were able to get around them by detouring down Fillmore and then down Sinkiewicz and returning to Gibson, subsequently arriving at our destination.

You say Sinkiewicz Sin-KEV-vitz. My Polish pronunciations are getting pretty good! Though they have a way to go before they get as good as my Italian pronunciations which improved greatly in California thanks to Leonard Pennario coaching me on them. He used to laugh when I mispronounced something and then he would teach me the right way. Pennario had a sexy and musical way of pronouncing Italian and I would always laugh at that. I would make him say certain words just for the heck of it. "Say Toscanini, Leonard," I used to ask him. "Say Cantelli." And he would do it.

I wonder if I will ever get to the point of asking Eddy, "Say Sinkiewicz, Eddy. Say Adam Mickiewicz."

That is where we are going to go for a beer one of these Friday nights, to the Adam Mickiewicz Library and Dramatic Circle. You say it Mis-KEV-ich. They have wonderful Polish beer there. Note to out-of-towners: As I have said before, here in Buffalo we do not have to go to Appleby's when we want a beer. We have options.

The rest of the world is ordinary.

In Buffalo it is like a different planet.
Posted by Mary Kunz Goldman on February 09, 2009

Hi Mary,
Now this posting REALLY strikes a chord with me. Being of Polish descent myself, and having been born on Gibson St. which you pictured, it REALLY brings back the memories. Too bad you are too young to have ever experienced The Broadway Market back it its heyday, the days of all that live poultry in the back part of the first floor of the ramp and the inside of the market jammed full of vendors!!! We used to go there all the time and still went every weekend after moving out to West Seneca. My wife and I don't get there nearly as much anymore unfortunately. I have to say, I got a kick out you learning the pronunciation of these Polish names. They will make a good Polish girl out of you yet!!! Thanks for brightening up my day dramatically with this posting, it was terrific!!!! I'll definitely look forward to coming back daily to check in on your future postings.

David, thanks so much for the nice words! We pay a lot of attention to the Broadway Market here on the Leonard Pennario blog. I cannot believe you were born on Gibson Street!! That is like being a celebrity. You and your wife must join us on one of our trips to the Three Deuces!

Mary I think a celebrity would be the last thing I'd ever be for sure. I just might have to check out the 3 Deuces next time we go to the Market.

Who knows where to download XRumer 5.0 Palladium?
Help, please. All recommend this program to effectively advertise on the Internet, this is the best program!