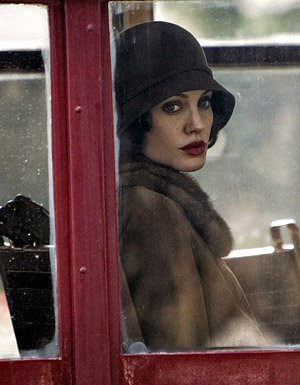 I was late for Mass today because Angelina Jolie stole my hat.

That is my Mass-going hat she is wearing in the picture above! That is the picture you always seeing these days because Angelina Jolie is up for some kind of Oscar. I forget which one. Last year, I knew all about the Oscars because Leonard Pennario used to go with me to the movies all the time. But this year, I am lost.

Back to Angelina Jolie's hat. I have the exact same hat and I wear it to church all the time because we are sort of supposed to wear something on our heads (it is no big deal if you don't, but I enjoy fussing over this kind of thing). I like this hat in particular because it does not get too hot and also it is kind of different. Well, it was, anyway. Now it is everywhere.

This morning I made the mistake of telling Howard that Angelina Jolie's hat looked just like mine. So he was taking pictures of me in my Mass-going hat so I could show everyone in Blog-O-Land that it was true, she copied it. 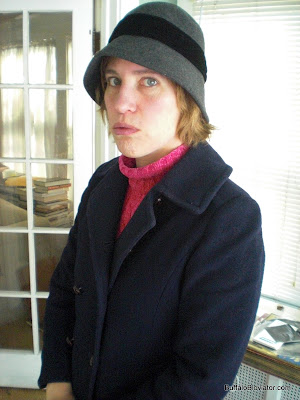 Mary before realizing that she did not allow time for losing her car keys.
Howard took a few pictures of me until I got it exactly right, with my lips puckered to look like Jolie's. It was hard to do it just so and I kept laughing.

Then we took pictures of Howard in my Mass-going hat. And we had to take a few of those too while he got his lips just right.

Then it was time for me to put my hat back on and go to Mass. And disaster struck! First it took me five minutes to find my missal and then I could not find my keys. I ransacked my purse. No idea! Combed through the junk in the dining room. No luck!

How do I live in the squalor I do??

Howard swung into action and started taking my extra set of car keys off his key ring. He does not go to Mass with me but surely he is receiving graces in the world to come for helping me, over and over, on my mad dash there. Once when I got stuck at the end of the driveway he dug me out. He told me: "You will get to Mass if I have to drive you there myself." 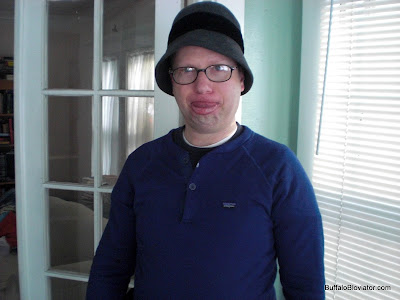 Howard looking for The Wife's car keys.
Did I find a good guy or what? You know how sometimes people get sainted for little things? One day I can imagine a card reading: "St. Howard Goldman. Helped His Wife Get To Mass."

Perhaps my Crown Vic can get sainted too. I floored it on the 190. I was going about 80 and the funny thing was, all the other drivers were getting out of my way. How polite they are, I thought. They must figure I am in a hurry to get to church. Then I remembered: No, they think I'm a police car! That is what always happens.

I thought: If this is not the dumbest thing, I am late for Mass because I was taking pictures of myself trying to look like Angelina Jolie. I got there almost on time but I missed the Asperges which is one of my favorite parts of the Mass. It serves me right. Mistakes were made as Richard Nixon said.

Now that I am obsessed with looking like Angelina Jolie, am I going to start wanting to have octuplets?

Cheer up; you're showing your youth. When I was young prior to the Vatican II 1960s, it was indeed a big thing for a woman to cover her head in church. Ask Fr. Secondo. I can remember school girls fumbling for a handkerchief to pin on the top of their heads when they didn't have legit headgear. It was also ironclad law that a male never entered church unless bare headed. Even though I'm now one of those confused freethinking enemies of all values decent people hold, I still find myself automatically pulling off my Prof. G. watchcap (I guess you could call it my mortarboard) when I walk into the nave of a house of worship.

I am in agreement with Prof. G about the females wearing something on their heads when entering church. It would have been the end of the world to have done otherwise. I have to say, there really was something to be said for those old traditions. I loved this blog entry, it was hilarious.