The secrets of the St. Anthony vaults 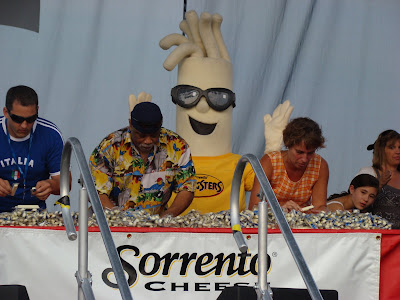 This morning I got to go cross-country skiing for the first time in two years. I missed last year because I spent all winter in California with Leonard Pennario. Also today, my brother George's car got stuck at the end of the driveway and we had to dig it out. Another guy showed up to help a girl whose car had gotten stuck across the street. He helped us in addition to her.
"Thanks so much!" I said, after we had pushed George out.

He said: "No problem. This is life in Buffalo!"

The girl who had gotten stuck across the street was in a really bad mood and when George went to help her out he saw why: There was a parking ticket on her seat. Apparently her car had been stuck there all night. You heard the man: This is life in Buffalo!

In addition to all this there has been great excitement on the Pennario front. Thanks to an unexpected rich source -- my parish priest!

Warning: This story is a little weird. It is a bit along the lines of the famous hi-fi story. But there have been so many odd coincidences involving this book I am starting not to think about them anymore. So here is what happened.

I was supposed to have gone to a concert the other night at my church. But I couldn't go at the last minute because Howard was making me go to this party instead. My mom and my sister Katie went to the concert. Which, by the way, everyone said was excellent and I feel very bad I couldn't be there. They had one of my favorite pieces on the program, Mozart's "Exsultate, Jubilate." It has the famous, gorgeous "Alleluia" which you can hear here.

After the reception, my mom picked up a bulletin lying near the door and put it in her purse. I do not know why she happened to pick it up. I also do not know why it happened to be this old bulletin, from back in September. But anyway, this old bulletin was lying there, and she picked it up. And she told me the next day, "You have to look at this."

And the bulletin had this story about Pennario in it. Our pastor, Father Secondo, he had written a little essay about Pennario, about how he was baptized at St. Anthony's, about what a great pianist he was.

Two things puzzled me. No. 1, I didn't know how I had missed the story back in September. I always read my bulletins. And I remember this one because it also had something about me and the cheese-building contest at the Italian Festival, where I won $250 for the church. The bulletin misspelled my name, I remember laughing about that. That is me in the picture up above, by the way, attempting to defend my title in the Sorrento Cheese-Building Competition. I am the one in the orange dress, hard at work, egged on by the Cheese Stick Man. Next to me is the great Buffalo R&B singer Lance Diamond. He is my friend on Facebook. That picture is from the blog of my friend Judi Griggs. You can read her account of the contest here.

So, sure, I remembered the cheese contest. But I did not remember that Pennario story. The padre must have wondered why I never mentioned it.

Anyway, all day yesterday, the padre and I were going back and forth on our email about this. We get to call Father Secondo "Padre" because he is from Milan.

The padre loves music, which is why St. Anthony's has its own orchestra. He looked up all the records for me and Pennario was baptized at St. Anthony's, on July 9, 1924. So Pennario must have been screwed up as far as where he was baptized. I totally understand. When I got married I went looking for my baptismal certificate at Christ the King. It wasn't there, and I panicked, thinking: What am I going to do? Then it hit me: I was baptized in South Buffalo, at Holy Family Church! You get mixed up.

Pennario's parents were married at St. Anthony's -- he had told me that -- and sure enough, Padre Secondo found that in the records. The padre also came up with the town in Sicily where Pennario's father, John Pennario, was from. Actually he was Giovanni Pennario. That is what is in their records. Pennario's mother, Mary Pennario, was originally Maria Chiarello and she came from the same town. Pennario had told me she was born in Buffalo.

This was all kind of emotional for me. Because in 2007 two big things happened to me: one was that I met Pennario and began this book, and the other, that happened right before that, was that I found my way to that Tridentine Mass at St. Anthony's and I came to love it so much.

And sometimes at Mass I have thought: it makes sense in an odd way, that I go to the church where Pennario was baptized. And then I would think: no, wait, he was baptized at the Cathedral. It never quite made sense. And now I see why.

I would have checked into it at some point, being the good biographer that I am. But I hadn't gotten around to it yet. It is funny to find out this way. It is as if the old man was tapping me on the shoulder, saying, "Hey, Mary, wait, I goofed this one thing up." I love that.

Pennario would have gotten a kick out of that.
Posted by Mary Kunz Goldman on December 20, 2008

The bottom line is that she had a blast at the party.

Nice to have Father Secondo do some research for you. Many years ago, when I was writing a study about historic pipe organs in Buffalo, I let him know that the Hook & Hastings organ in his church was built by an important American firm. I knew the year it was built, and where it was first located, but he found the year that it was moved into St. Anthony's (1911). He's a scholar and a good person to know. I think that he also told me that the American premiere of Cavalleria Rusticana was given in Buffalo. You might check this out to confirm it...?

Mary, You can thank me for laying down most of the ski track at Delaware Park yesterday. Geez, almost 11 a.m. and I was only the second person to ski and the first for most of the section along the 198. And today, it's probably all covered up by the wind. Mike