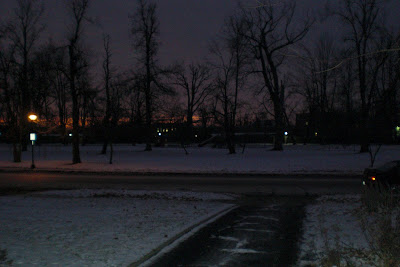 The sunrise was beautiful this morning and I was celebrating the snow so I went out on the front steps and took this picture.

Then I got brazen and walked down into the driveway and took this one. I looked like a nut in my pink pajamas but at least I was wearing slippers. That is a real Buffalo moment when you walk outside in the snow in your bare feet. We have all done that. 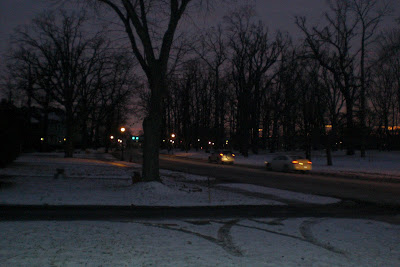 The second picture is the superior picture. Not only does it capture the tire tracks on the lawn next door -- that is the kind of neighborhood I live in -- but the composition is better. With my extensive artistic training I can tell that. Still I have special affection for the first picture because that was exactly what I saw when I went out to get the paper. I had to work to get my eyes open so I would be able to take the picture.

The dark side of the snow is that I still have not succeeded in getting the snow tires on my car. Yesterday I stopped off at the place at Main and North but they had me make an appointment for Thursday. But what would I do there for the whole hour and a half they are working on it? I just about fell over when they said that was how long it took. Why does it take an hour and a half to put on your snow tires? It is not as if anyone has to go anywhere and get them. They are right in the trunk.

Every time you go to any car place there is some kind of bad news.

Well, here is an idea. Howard said I should go to Dunn Tire because at least then I could go to Kmart while they were doing the job.

Maybe I will find something by Leonard Pennario! Well, I probably won't. Pennario does not turn up at thrift shops.

Unlike other pianists I could name.
Posted by Mary Kunz Goldman on December 03, 2008

Definitely Amvets. That place is my stress relief.