The nut in the bathrobe 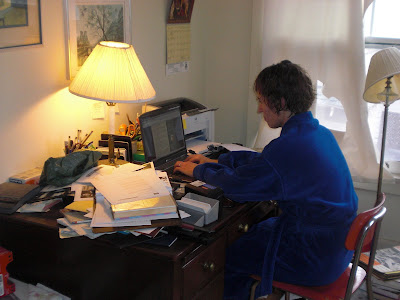 That post that Howard wrote yesterday had me laughing so hard I could not write or think for two days. Oh, wait, I can never write or think anyway. Well, at least yesterday I had an excuse.

Because I couldn't write or think, what I did was call this guy Phil, who was a big bridge buddy of Leonard Pennario and also his decorator and knew him well for almost 40 years. That is what you do when you can't think. You interview people. Then they do the talking and you just sit there and egg them on.

Where does that phrase come from, to egg someone on? Anybody know? It probably goes back to the 12th century, to something that makes no sense to us now.

Back to Phil. He is 81 and lives in Michigan and I loved him from the first sentence he said to me, which was, "Oh, please, you don't have to explain who you are."

He is valuable to me partly because he knows a lot about music. That is not true of all Pennario's friends. If I were writing about some not-hot pianist like Abram Chasins it would be true but in Pennario's case it is not.

Phil had a friend visiting him yesterday and they had just gone through this Mozart concerto marathon. They had watched a video of Mitsuko Uchida playing No. 9, followed by No. 12, so Phil could show his friend what a great concerto No. 9 was and how superior it was to No. 12, two opinions I totally agree with, and that Phil and I hashed over at length. Then they heard No. 20, the tremendous D Minor Concerto. I love the idea of listening to three Mozart concertos end to end. Phil and I will get along fine.

It turns out Phil has been reading my blog. He said that because of it, he knows I can do this book and that it will be a success. "At first I wondered about it," he said. "But then I started reading what you wrote. And I told this friend of mine, 'She's this nut! She's going to do a great job!'"

Then he said: "I love how you wear his bathrobe."

These are valuable endorsements I am gathering for the back cover of my book that will help me nail a good publisher.

Hey, you won't be laughing when this thing sells a million copies.
Posted by Mary Kunz Goldman on November 02, 2008

Speaking of egging on, you would put out a challenge to a jerk who thinks he knows everything! According to www.answerbag.com/q_view/143968, to egg, as a verb, is 12th century and is derived from the Norse "Eggja." I don't know if there are other answers, but this sounds plausible.

If I may add this, I think the most beautiful of all piano concertos, (as music, not display), is Mozart's # 21 in C minor.