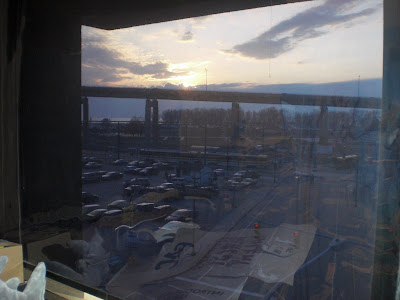 This is yet another demonstration of my newfound photography skills. Here you see the view from my office window of the sun setting over the beautiful Skyway, Buffalo's signature bridge.

Did anyone else catch Tom Bauerle's ghost show on Hallowe'en? He was playing those tapes this woman had made in a cemetery, tapes that had these disembodied voices. The woman, this ghost-hunter, took out her camera and took a picture and you heard this spooky voice saying, "Click."

I know it was probably a fake. But let me tell you, I was spooked! I heard that "Click," and I had heard enough. I went running around the house turning off radios. All these weeks looking forward to that show, and I lasted five minutes. It sounded demonic to me. I wanted ghost stories. I didn't want this demonic stuff.

Speaking of things demonic, I am trying to begin this Election Day in good spirits. The country will survive. Sanity will prevail, if not in the short run, then in the long run. As Jocko says: "Whatever happens, we'll be fine." He kept saying that over and over the last time we heard him play at the Hyatt, a few days ago, which makes me think he is very worried. Well, we will stay calm. We will get through this.

Still, it is tough! Yesterday I was at the Buffalo Athletic Club and they make you get onto a really tiny elevator to go in and out of the place. And on my way out I was stuck in this elevator with five Obama supporters. They were all guys and they were all bellowing and here I am, squashed in the back of the elevator, feeling as if I am going to pass out.

But I couldn't! I am too used to not opening my mouth and am too stressed out at the moment to learn to do differently. Also I was coming from my Monday Pilates class which is like this death march. It is designed to make you repent everything you ate over the weekend and every bit of wine you drank. At the end of the class we were all lying on our mats like dead people. I could not go from that to arguing politics in an elevator.

Again, weakling behavior, and Howard mocked me out for it. But I am not the only one in a tough spot these days. On Sunday I got a desperate cell phone call from my friend Michelle. She was at a party marooned among Obama supporters. She was hoping I could get her out of there. Unfortunately I was on the phone with Leonard Pennario's bridge buddy Phil and so missed her SOS. Still I am telling you, these situations are out there.

Wow, what a morning I am having! I am jittery!

I will focus again on my inspirational photo of the sun setting over the Skyway. It is so beautiful.

Who ever got the ball rolling to get it into so many of our heads that we should resent it? Did Higgins start that, or was he following the lead of someone before that?

Don't freak out, ok? Contrary to what you may have heard, Barack is not a socialist, he is not Muslim, he was born in Hawaii and is indeed eligible to be our next president, and he does not want to make you depend on the government to take care of you! He is a good, moral American, who, like many of your friends, just happens to have very different opinions on some things than you....So chill, mama, don't you believe the lies out there, though the GOP is trying their best, don't you be afraid of Barack!!!! - Charlie

Charlie, thanks for your sweet and sincere words! Whoever wins, let's have lunch. Mary