'And he looked at me with his deep black eyes' 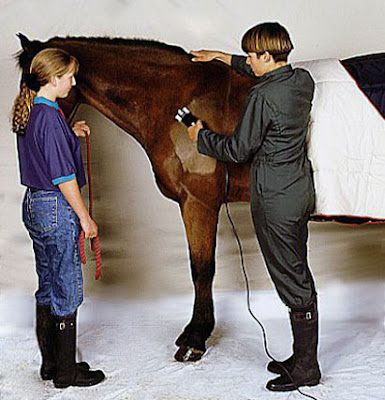 This is how you know it is going to be a long morning: Your computer is set to Google and someone has been searching for "Horse Body Hair Clippings."

That is what Howard is looking for these days because you have to mix horse hair with plaster in order to get walls the right strength. Or something like that. Howard is restoring Big Blue, his big ol' house off Niagara Square, exactly the way they would have done that in the Civil War era.

Looking at the results of the Google search I learn that the German firm Hauptner makes the best horse clippers and also that when you clip a horse you must keep your wrist flexible and relaxed. It is like playing the piano!

Which leads us nicely into today's story of the supernatural. Zounds, we are running out of days in October. I may have to start doubling them up.

This one woman I have been talking to for the book thinks she knew Leonard Pennario in another life.

I am not one of those people who believe that we have had other lives. But I am very entertained by people who do. Other lives make for good stories, I will say that. And her story is a good one.

This woman I talked to went to hear Pennario play because her son was a very gifted young pianist who was studying with someone important, and the son did not want to miss Pennario when Pennario came to town.

This was at the Kennedy Center. She sat in the front row and as soon as Pennario walked out on stage her heart lurched. Well, my heart would have lurched too because this was something like 1968 and it was incredible what Pennario looked like back then. But what she said is that she was sure she had seen Pennario before, in a premonition. That is the word she used, premonition.

Pennario was playing Rachmaninoff's Second which only made the situation worse. I mean, listen to that clip. Listen to how Pennario played it. Thunderstruck after the performance, this woman I talked to went backstage to look for him. She opened a door and there he was sitting back in a chair, his hands behind his head. Suddenly she didn't know what to say. So she blurted out: "I'm ... I'm looking for someone!"

Pennario said: "Well, there's nobody here but me."

They got to be friends and soon afterwards she asked him: "Where in the world do I know you from?"

And she said: "He told me, 'Well, don't you know, I was a warlock, and you were a witch, and we were both burned at the stake.' And he laughed, and he looked at me with his deep black eyes."

Wow, what a nice couple of Halloween sentences!

Aren't we all lucky I am not writing about some boring pianist? I would never be able to tell stories like this.
Posted by Mary Kunz Goldman on October 28, 2008