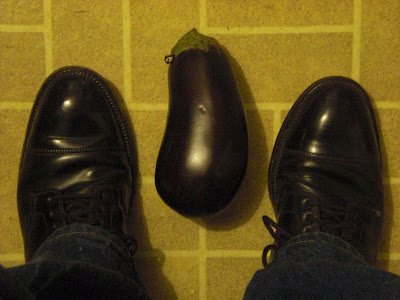 Shoes and eggplant.
Today it came crashing in on me, the grim reality of what I had wrought yesterday at the Clinton-Bailey Market.

Before yesterday, I had been good at not going near the place. Because I belong to that, ahem, Community Assisted Agriculture movement, and every Saturday I go around the block and pick up a bag of produce from the farm.

But yesterday, I had to go to the Clinton/Bailey Market. What a scene there! Such abundance! And a sound system playing "American Pie" and everyone singing along. And these huge black draft horses pulling a wagon. And everywhere you looked, honey, peppers, cheese..

Now here is what is in my kitchen:

It is really too much. They tell you "eat local." Not: "eat the locality." I mean, you cannot eat the whole farmers' market. But that is what I try to do, whenever I go to the Clinton-Bailey market. I cannot go back there again. That is for sure.

Still, I try. I cooked for Leonard Pennario once. I made him beef stew. I can do anything. I cooked up the cauli today into soup. It used up one of the carrots. (One down, four to go.) And I got to use up this awkward half a brick of cheddar cheese. I cook through the week the way normal people do Sudoku. It is a big, complex puzzle. You have to not repeat anything and have nothing left over.

Last week I killed the fatted kohlrabi. We used it for about three dinners.

There was a red cabbage and that went into a German pork dinner.

But Howard gets the creativity award. He came up for a new use for eggplant. He uses it to check the color of his shoes, these eggplant-colored shoes that he loves. Just now I walked into the kitchen and Howard was standing there looking down at his feet, going: "Unbelievable."

Between his shoes was an eggplant. He was staring at it.