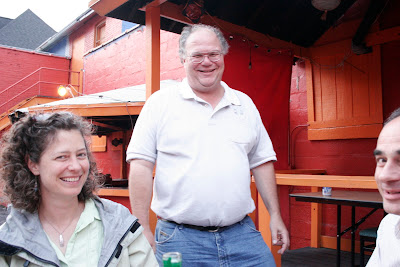 Jay (center) enjoying himself at Big Blue.
This morning I was awake at 5:30 a.m. because number one, Howard's alarm went off for some goofball reason, and number two, I was still jolted by something that happened yesterday.

It is so funny how things can change on a dime. Yesterday morning went great. First I wrote that flipped-out blog post. I had a riot with that. Next I had to interview this pianist and famous Mozart expert, Robert Levin. And I had a blast talking to him. Levin is coming to UB to play Mozart's 23rd piano concerto, which is way up there on my list of favorite Mozart piano concertos. He is a talker, I was delighted to find, and I was in no hurry to get him off the phone. So we talked for over an hour and a half.

I got into the office a little bit late because I did the interview from home. And I was so excited and happy about writing this story I was bouncing off the walls. Then, right away, something terrible happened. I got the news that we had lost a friend at work we all loved.

The friend was John F. Bonfatti. His obituary is in today's paper. His last name in Italian means "well made." I know that because Beethoven's doctor's name was Malfatti, which means badly made. Sorry, I know this is weird. But I have often thought about that.

We called him Jay. He was on vacation with his brothers and sisters and nieces and nephews and he died in his sleep.

Jay was not just any colleague. He was the center of everything at work. Last summer when I was on the News' kickball team Jay was there in the outfield yelling at me to look alive. That was always what he yelled: "Kunz! Look alive!" Because I had a tendency to zone out in the outfield and he knew that.

He was one of the warmest and most welcoming human beings ever. I remember when he was hired at The News (or re-hired -- I guess he worked there earlier). The very first words he spoke to me were, "I'm having a party." I went to the party and Jay, the ultimate single guy, had the barbecue going and speakers in the window. I have a million memories of Jay like that. He was at my house too. He was everywhere.

And here is what really got me. Last fall, when I met Leonard Pennario, I was in this tough spot because Leonard had asked me to have dinner with him but to do that, I had to get out of reviewing a concert by the pianist Andras Schiff. Wow, what an "I Love Lucy" situation that was. Leonard was in his glory. Speaking of which, watch out, if you're at work, before clicking on that Pennario link. That performance is really a thrill, which is why I am listening to it today -- it is boosting my spirits!

Anyway, I had a matter of hours that day last fall to work out a complicated switcharoo. The only person who could catch Schiff for me was our reviewer Garaud MacTaggart. But he was already booked to do some silly pop concert. So I had to find someone else to do the pop concert, so Garaud could do the Schiff concert. I went to Jay. I begged him. Jay understood the situation. He said yes. I remember him laughing with me about it: "Let me get this straight, Mar. There's this pianist in his 80s...."

I just cannot imagine the office without Jay. It is terrible to think of walking past his desk and not seeing him sitting there. I took my cell phone and went outside because I had to call Howard and break the news to him, which I hated doing because Howard loved Jay the way the rest of us did. So that was how my day yesterday went. One minute I was on top of the world, and the next I was standing on Washington Street crying.

In the afterlife, that is one of the questions I will want to have answered.
Posted by Mary Kunz Goldman on August 29, 2008

Hugs and great sympathy for the loss of your very special friend! And much love!

Yes, I would like to know the answer to that last question too...

Much sympathy on the loss of your friend and colleague.

I am sorry for your loss. Hang in there.

You have my sympathy and I find your way of writing about this kind of thing moving, as I did about your memorial for Leonard Pennario. I truly envy your humanity and ability to love, as I have always been deficient in that department. I thought the obit for Mr. Bonfatti in the paper was also very affectionate and a suitable memorial for a nice man.

Your warmth in writing during your time of loss is comforting. A goal for me to strive for.
You will be in my thoughts and prayers during this difficult time. Need an ear to bend -- call.
Hugs & Love