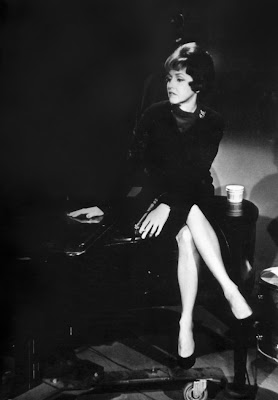 Jazz singer Anita O'Day.
Lastnight I went to Mass for the feast of St. Anthony and we were asked to pray for Tim Russert. It reminded me of when I was a kid and Bing Crosby died. His name was mentioned on the Mass intention list, along with parishioners who had died. They used his real name, Harry Lillis Crosby.

I am sad about Tim Russert though I did not often agree with his politics and sometimes I would turn off his show. My friend Jane and I were in the Three Deuces, that bar across from the Broadway Market, yesterday when we heard he had died. A guy down the bar mentioned it. And we couldn't believe it. We thought we had heard wrong. It's sad for Buffalo, losing Tim Russert, and so suddenly. Looking at that tremendous picture of Russert on the front page of the paper this morning, I was thinking, he had a magnificent interviewer's face. Like a bulldog.

Just now at the library -- I cannot stay away from the library -- I picked up a biography of Leonard Bernstein and the author had written something like, "I am well-qualified to write the biography of Bernstein because he and I are both American Jews, he was from New York and I was from Boston, both major cities on the U.S. East Coast, blah blah blah." OK, the "blah blah blah" was mine, not hers. What I am getting at is I would be well qualified to write the biography of Tim Russert because we are both Catholics from South Buffalo. According to that author's reasoning, anyway, which I think is kind of dopey, but what do I know.

So how about this stable? We have not heard anything about it today and I have been afraid to drive down to Jersey Street and see for myself what is going on.

Wasn't it supposed to be shot at dawn? Are they going to implode it or what? I have been really chicken about this. I have not wanted to learn the details.

If there is one thing I hate it is when they implode something and all these slugs show up with their lawn chairs and popcorn and celebrate the sight. This happens a lot in Buffalo. People cheer when the dynamite goes off. Creeps.

What is with me today? I need a glass of wine or something. No, wait. I need to talk about an old building that is doing well. I will talk about Big Blue. That will cheer me up.

Lastnight at Jocko Howard and I got talking with this guy Greg. I only just met Greg but I love him. He was personal assistant to the great jazz singer Anita O'Day for the last 10 years of her life. He had a lot of stories to tell about that.

He is the second person I have met who was close to Anita O'Day in her last years. What does that say about my life? It reminds me of what Howard said to me once, "Why do we know so many people who used to be in vaudeville? What is with that?"

But back to Big Blue. As I may have mentioned, it used to be a series of gay bars. And Greg told us lastnight: "I came out in that building."

I said: "Greg, what did that entail? Did you make an announcement to the entire bar or something?"

He said: "No, it wasn't that big of a deal." His explanation seemed to be that he was comfortable and stuff, and everyone got the sense that he was happy with who he was, something like that.

Howard said: "We should put up a plaque."

Isn't it great that Big Blue survives, so an event like that can be commemorated?

Good thing Greg did not come out in that livery stable.
Posted by Mary Kunz Goldman on June 14, 2008