The Bosch, the gift that keeps on giving 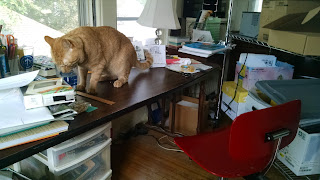 It is funny how one thing you do in your house can lead to a chain reaction.


A few weeks ago, remember, the Bosch stove kicked once too many times and I kicked it out. Now I have that no-frills white stove with not so much as a clock. It is a pleasure to cook on this new stove, I will tell you that. No worries! However, also, no clock.

It is weird not having a clock. Not until you do not have one do you realize how often you looked at it. I keep glancing over and over at this blank white stove.

Finally this morning I said to Howard that we should keep an eye out for a kitchen clock. And he came downstairs with a never-opened clock radio. This is the kind of life we lead! This is why it is fun to be us.

We situated the clock radio in the hall outside the kitchen door on the radiator where it replaced the boom box. Now the boom box had to go somewhere.

The boom box is also a CD player but downstairs we never played CDs, only records. I thought: I should put it upstairs in my, ahem, studio. I do not spend much time in the studio actually drawing because I like to be out drawing on location. But it is there for when I need it to do technical stuff, mostly. Like photograph my creations for Etsy or BuffaloDonut.com. 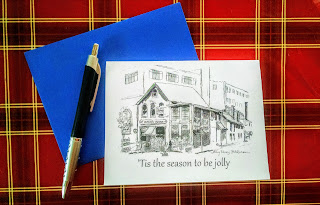 And when I do that, I thought, it might be nice to have music sometimes.

Optimally I would like to have a record player but the CD player could do until the real thing comes along. I have all these CDs basically doing nothing. I have pared my collection way back but held on to some things I love, Lieder and Leonard Pennario and whatnot.

So I put the boom box in this dresser in the studio. Before I did that I had to do some cleaning. See that picture at the top of the post? Things do not look like that any more!

Next, to plug in the boom box I needed to perform some electrical derring-do involving the power strip. Nothing serious, I just had to move it and straighten out some cords and whatnot.

Finally when I got things straightened out I took a fresh look at this weird '70s pole lamp standing next to the dresser. It had been mine when I was a kid, I mean, my parents had assigned it to me and my sisters. Somehow I had inherited it and it had made its way to this room and had just been standing there because the cord did not reach to any plug socket.

Now, with a little more derring-do, it did! The studio needed more light. It was worth a try. I plugged it in, and -- it lit!

There was that smell of when you plug something in that has not been plugged in in decades.

Happy in the new light, I grabbed a CD, which turned out to be Schubert's "Die Schoene Muellerin." When I was just grabbing a CD the odds are good it will be "Die Schoene Muellerin" because I have a million recordings of it. This one was by the excellent baritone Christopheren Nomura. In the bright light of the pole lamp, I snapped it into the boom box and hit "play."


And people thought I would regret getting rid of that Bosch.

Posted by Mary Kunz Goldman on October 14, 2019 No comments:

My Guardian Angel and me 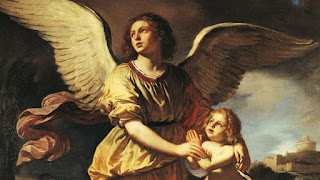 This evening I went to Mass. I had a feeling I should go to this daily Latin Low Mass we have at St. Anthony's because today is the Feast of the Holy Guardian Angels. I thought I should go on account of my Guardian Angel who does so much for me.

It is a complicated situation, the Guardian Angels, and I admit there are things I do not quite understand. However it is in Scripture, that we have a guardian angel. And I know I keep mine working overtime.

Why did I get her? That is what he is thinking. Or she. I am afraid do not have my theology straight on this. Do angels have genders? They must, because think of St. Michael the Archangel. It was just his feast day on Sunday.

This Guardian Angel appears to be a woman. This is by a 17th century Italian painter who surely knew what he was doing. 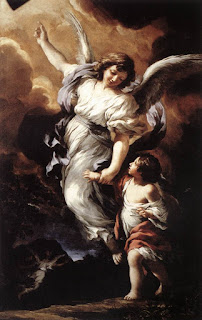 The picture at the top of this post, by another Renaissance painter, also shows a female angel with a child.

Not to show disrespect to these august masters, but it is easy to portray a guardian angel guarding a child. What about guarding a grown-up?

Why do I always picture a guardian angel as a male being, guarding an adult? These paintings to be honest took me by surprise.

Does Howard have a guardian angel? That is another thing to think about.

Do you have to be Catholic to have a guardian angel?

If so then I would suggest everyone become Catholic right away because who would say no to an angel by your side? All other things being equal?

On the way home while I was pondering all this, I turned on the radio and WNED was playing Saint-Saens' "The Swan." This beautiful, peaceful music. I drove by the Peace Bridge blissed out.

Then I thought: Is my guardian angel enjoying this music?

Can he or she hear music? I imagine yes, because angels are always observing your life and what you say and do.

But this music, beautiful as it sounds to me, must be like nothing to the angel who is used to heavenly music.

Imagine what my guardian angel thinks when I listen to some really dumb song as is sometimes my wont.

While I was on this topic I asked my guardian angel to pray that I am able to complete my book on Leonard Pennario and mastermind the publishing.

This is why you should not spend too much time by yourself. If you have other people in the car you are not pondering this stuff. 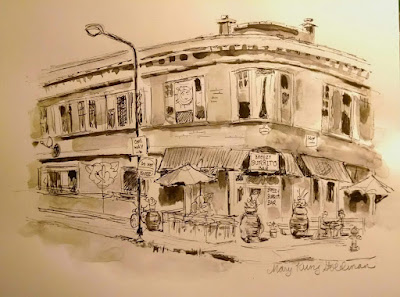 Yesterday I realized that today would be Inktober. Inktober is this art challenge that demands that you do an ink drawing every day in October. It can be anything! It can just be your cup of coffee. Just do it.

I did Inktober last year. I never imagined how it would change my life. The first day, I went out in the evening, and I drew one of the doors at the Buffalo Zoo which is pretty much across the street. Then I went home with it and took a brush to it and tried to ink in the shadows I had seen. Then I sat there at the dining room table and looked at it.

I still like this drawing, the drawing of the zoo door. Actually I did two, on facing pages. The one on the left was the one I brushed up and the one on the right was there because ... You know what, I forgot why I did two. But it is still something I do a lot, do one drawing and then another of the same thing, right away. You flip the page and start over. On account of you never know. 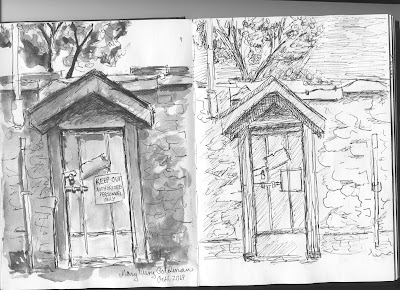 They give you prompts for Inktober but the prompts are optional, and though I thought about using them -- I wanted to use them -- I could not get it down to a good system. The first prompt was "Poisonous," and I was going to draw the Five Venoms Tattoo studio over on Hertel Avenue. But the plans hit a hurdle. I think it was raining or something, or I could not get a good vantage point on Five Venoms. It was a great idea but alas. All of a sudden you miss that day and it is the next day with a new prompt and you are behind.

So I adopted a theme of my neighborhood. Everything I drew had to be within walking distance, or a very quick bike ride. My neighborhood is amazing for Inktober's inky themes. I am unbelievably set up. I mean, within walking distance I have a Victorian zoo; the Hertel Avenue strip; and a world-class historic cemetery (Forest Lawn) complete with the grave of a U.S. president (Millard Fillmore).

What else? I can walk easily to statues of Mozart, Lincoln, the Indian Scout, and the Centaur. The History Museum is practically down the street. And the Albright-Knox Art Gallery, including whatever wacky sculptures they choose to plunk down in their front yard. I can walk to the old Pierce-Arrow motor car company factory, and various other ancient industrial sites, things I love drawing more than anything. We have the greatest water towers, the best old factories, atmospheric old alleys -- I ever drew Kmart and found it terrific material.

Which makes me think: I do believe I will continue to explore my neighborhood this year.

I did a lot of drawing on Elmwood today because the owners of Neo Gift Studio, the beautiful gift shop on Elmwood that I am honored to say carries my note cards, requested an Elmwood set. And I love drawing on Elmwood, love it. There is so much life and the buildings are so quirky. Elmwood would give me a lot of material this year I did not explore last year. And there are other options even closer to my doorstep. Such as: The Gates To Nowhere, the Monster House, and the Secret Staircase. Those are all ideas that occurred to me as Inktober approached. As I said, I live in a great neighborhood in a great city.

Who knows what tomorrow will bring?

Posted by Mary Kunz Goldman on October 01, 2019 No comments: